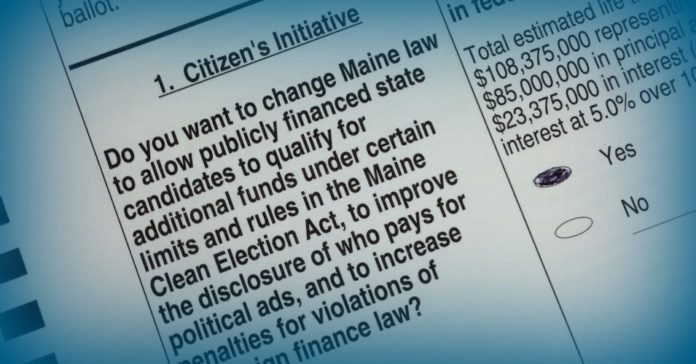 The Clean Elections Initiative was passed in Maine recently, keeping big money out of politics. Campaigners hope that this victory will be seen as a “flare to a nation” which thirsts to “reclaim control of our democracy”… particularly after the Citizens United court decision.

The Bangor Daily News states that the Initiative was passed with a vote of 55 against 45 percent. This measure will boost the Clean Election Act in several ways:

First by increasing the penalties that would be levied against those who violate the campaign finance disclosure rules.

Second, it will also rewrite the current ad disclosure rules, forcing the disclosure of a campaign’s three biggest backers.

Third, it allows candidates to apply for additional funds.

Finally, it will boost funding for the Clean Election Fund.

In 1996, Maine voters passed the Clean Election Acr. It was the first system for statewide financing of elections in the country.

“As is their custom, Mainers are leading the way for the nation,” said Miles Rapoport, president of the national pro-democracy group Common Cause “Their strong vote today for accountable elections further underscores their determination to make our democracy work for everyone; it reflects the sentiments of millions of Americans who are determined to rein in the power of big money and refocus our politics on issues important to citizens.”

Similar public financing laws were also passed in Seattle and Washington on the same day as Maine’s. Ohio voters also voted for a constitutional amendment which stops partisan gerrymandering in the state.

“There’s a direct link between the big votes in Maine for accountable elections and Ohio for fair redistricting,” Rapoport continued. “Voters in Maine, like almost all Americans in both parties, are mad as hell about money in politics, so they stopped talking about the problem and did something about it.”

“They sent a signal to Big Money that common sense rules governing our politics are possible, indeed essential if we’re to have truly robust political debates, and that the people will pass them through citizen action if legislatures fail to act.”

This Article (Maine Leads The Way Against Big Money In Politics, People Vote For Clean Elections) is free and open source. You have permission to republish this article under a Creative Commons license with attribution to the author(CoNN) and AnonHQ.com.