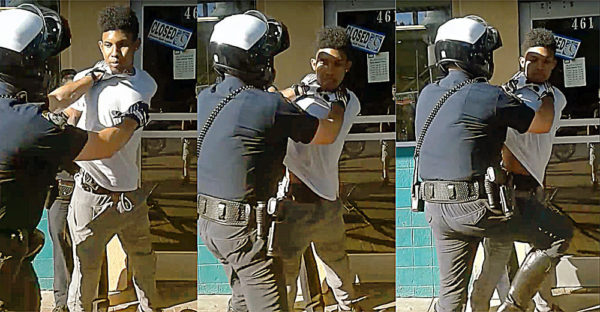 A new video posted online has showed a police woman arresting an unidentified young man who was riding a bicycle on the sidewalk of a road in the city of Merced in the State of California, United States.

The video was recorded by an eyewitness of the incident. However, the eyewitness was assaulted and arrested for filming the incident. Somehow, he managed to leak the video online while in the grips of the police.

In the video, an unidentified man is seen arguing with a police officer. The man asked the police officer the reason for the stop, but the officer was unable to give any tangible reason. She instead called for a backup. The officer also demanded the ID of the man, which the man refused to give her. The Free Thought Project reports that the police officer was attempting to ticket the man for riding his bicycle on the sidewalk. According to the Merced City Municipal Code Section 10.44.040, bicycles are prohibited on the sidewalks from “V” Street to “G” Street on Main Street. However, whether or not this man seen in the video was on one of those sidewalks, is unclear.

The man, knowing that he has not committed any offence, then tried to ride away. But the female officer will not allow him. She attempted to handcuff the man, but because the man is stronger than her, she was unable to do it. The man peacefully resisted the officer without any violence.

The other man filming the incident is even heard telling the cyclist not to resist the officer. The cyclist, at this stage, seemed to obey what the man filming said. He put his hands to his back to be placed in the handcuffs, however that was when a male officer stormed into the scene. Without any provocation, he grabbed the cyclist by his throat. The cyclist was then violently handcuffed. The male officer acting very aggressively – like a robot – and used his hard boot to hit the cyclist, ordering him to sit down. The cyclist continued to demand the reason for his arrest as he landed on the ground.

As he continued filming the incident, another officer appeared behind him. The officer tackled him from behind, grounding him. That was when the video ended.

After uploading the video on YouTube, the man explained that he was arrested and charged with a misdemeanor for resisting, delaying, or disrupting a public officer. The man also bemoaned the lawlessness of the police, as he never committed any of the offences leveled against him.

When the video was posted online, the Free Thought Project contacted the Merced Police Department for their side of the story, but as at writing this story, the police department had not responded to the request.

Particularly on the arrest of the cyclist, people who have watched the video are divided on opinion. Some believed he committed an offence by riding on the sidewalk, while others said the police officers acted lawlessly.

This article (Man Assaulted and Arrested for Filming Californian Police Who Were Arresting Another Man [Video]) is a free and open source. You have permission to republish this article under a Creative Commons license with attribution to the author and AnonHQ.com.