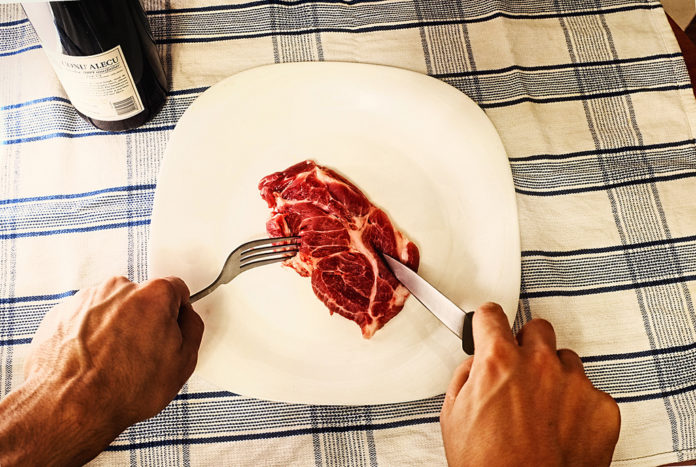 Back in 2013, a story about a young man who had eaten “nothing but raw meat” for five years circulated online. Since the original story was published, Vice has revisited Derek Nance to find out if he was still happy and healthy eating nothing but raw meat.

The original story, written by Julian Morgans, raised many questions about the safety of the unusual diet. Typically, consuming raw meat is associated with a high risk of developing food poisoning. Pathogens or parasites, the most common being salmonella, live in the animals that we consume and can infect us if they are eaten when undercooked or raw.

This Guy Has Eaten Nothing but Raw Meat for Five Years http://t.co/svDh6dJeOs

Contaminated food caused around 582 million cases of 22 different food-borne diseases in 2010, according to data from the World Health Organization (WHO). Of these cases, an estimated 351,000 resulted in death.

However, putting aside the risks of contamination, the unappetising diet also makes us question whether the human body can remain healthy when it is fed nothing but raw meat. Nance introduced himself to the raw meat diet to help relieve the symptoms of a mysterious stomach condition, Vice reports. Since adopting the diet, around 8 years ago, Nance’s symptoms have subsided.

The human body uses incredible mechanics to draw almost everything that our body needs to function in a healthy manner, from the foods and drinks we consume as part of our diet. For these reasons, nutritionists recommend that people eat a varied diet.

“A key premise of healthy diet is variety and selection of food. That’s because of micronutrients – vitamins and minerals – that can occur in very small amounts in a variety of foods,” Dr Beth Mayer-Davis, Chair of the Nutrition Department at the University of North Carolina, told The Guardian while discussing Nance’s diet.

Curious to find out whether Nance was getting the vitamins and minerals he needed to stay healthy, Vice asked Nance how he got his regular dose of Vitamin C. According to Nance, “The organ meat of the animal actually contains vitamin C,” so he does not need to take additional supplements with his meat based diet.

However, despite Nance’s reassurance, nutritionists have pointed out that a diet of nothing but raw meat will leave Nance deficient of other important minerals in vitamins. “Fiber, for instance, is a non-nutritive substance in food that has a crucial function in the gut and in health in the context of a more typical diet. That would be a concern [for any meat-heavy diet],”  Dr Mayer-Davis told The Guardian.

Finally, it is also important to question how well the human body would manage the excess of fat and protein that would be digested as part of this diet. Our bodies use protein to build and repair tissues, as well as to make enzymes, hormones, and other body chemicals. Meanwhile, the saturated fat that meat provides our bodies with is used as a source of energy, which our body can also store for later.

However, while protein and fats are needed as part of a healthy diet, too much can be detrimental to our health and well-being. For example, excessive protein and fat can cause heart disease, the leading cause of death for both men and women in the United States, according to the American College of Cardiology.

Nance primarily dines on lamb, which he will slaughter himself before butchering and freezing at home; Nance avoids pork, as the animals are often pumped full of hormones and fed grains, which promote bacterial growth.

While little research has been done on the health effects of hormones in animal products, the use of antibiotics has been widely recognized as a potential danger to human health. According to a report, more than 70% of antibiotics that are medically important for humans are used in animals in the United States. The report concluded that high levels of antimicrobial use in food production can cause drug-resistant strains to pass through to both humans and the environment and advised that the number of antibiotics used in agriculture be dramatically cut.

Since the original article’s publication, Derek Nance has gone on to star in a number of documentaries including A Million Ways to Live. Feeling both happy and healthy on his nothing but raw meat diet, Nance lives on a farm in Kentucky with his four children and vegetarian girlfriend, Joanne.

This article (Man Eats Nothing but Meat, but is this Diet Safe for Humans?) is a free and open source. You have permission to republish this article under a Creative Commons license with attribution to the author and AnonHQ.com.