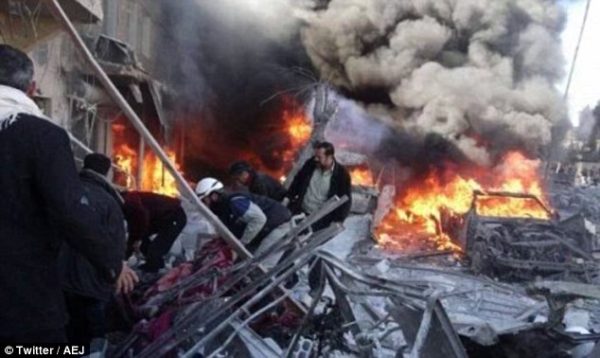 Recently, we published an article in which local residents living in northern Syria, confirmed to journalists that airstrikes being carried out by the International Coalition Forces – led by the United States against the so-called Islamic State of Iraq and Syria (ISIS) – have killed more than 200 civilians in the past two months.

It is said at the end of May 2016, the coalition forces started a special air campaign against ISIS, in collaboration with the Syrian Democratic Forces (SDF) in northern Syria.

The United Kingdom-based Syrian Observatory for Human Rights (SOHR) announced that on July 20th, 56 civilians, including 11 children, were killed in airstrikes by coalition forces in the Tokhar area in the northern city of Manbij, Aleppo province. The SOHR also revealed that 10 other civilians, including four children, were killed by coalition airstrikes in a separate incident in the village of Hamira, in the southern suburbs of Manbij. SOHR then totaled the number of civilians killed within the two months – when the airstrikes began in Manbij – at 167, admitting that the number could be higher as it did not get full access to areas hit by the strikes.

When journalists followed up on the SOHR publication to ascertain the truth, residents in the Manbij area confirmed that civilian death toll by United States-led airstrikes in the area, is more than what SOHR published. Residents said the number of civilians’ death in bombardments is more than 200. Although these heinous killings have occurred in Syria, the coalition forces led by the United States have kept mute over the incident, until the SOHR brought the matter to the attention of the media. Back in Washington, journalists tried to ascertain more information on why the airstrikes are causing casualties to civilians at this alarming rate.

The United States Central Command (USCC) confirmed to Al Jazeera that it has, and still is conducting airstrikes in the Manbij area. Surprisingly, the Command said it is unaware of any civilian casualties, and that it will be able to comment further after it has fully investigated the matter.

However, as the media is still waiting for the USCC investigation, the latest news is that another coalition airstrike has hit a children hospital full of civilians, mostly women and children. The tragic incident reportedly happened last Friday on July 29th, in Idlib, a northwestern part of the country. The hospital, bombed by the United States and its allies, belongs to the international children charity, Save the Children.

According to Save the Children, the hospital in Idlib, which has now been reduced to rubble, used to serve over 1,300 women, as well as performing over 300 deliveries each month. Save the Children said the airstrike hit the front of the hospital building, at a time when two surgical procedures were under way, and a woman was in labor.

Save the Children posted the short video below immediately after the attack on the hospital on Twitter. The video showed ambulance cars speeding from the area.

HOSPITAL BOMBING : Footage from the ground in the immediate aftermath, hospital served over 1000 people #Syria pic.twitter.com/rotqcAeXKQ

A spokesperson for the charity told Al Jazeera in an interview: “The bomb hit the entrance to the hospital, which is the biggest in the area, serving over 1,300 women monthly.”

Director for the charity in Syria, Sonia Khush said the bombing is disgusting, revealing that no militant was in the facility, and that it was bombed for no reason.

“Bombing a maternity hospital which is helping women living under the shadow of war to give birth safely is a shameful act, whether it was done intentionally or because due care was not taken to avoid civilian areas,” Khush said.

According to the spokesperson, the total number of casualties is currently unknown, but concluded that it could be horrible.

@Raqqa_SL @UnknownAkkari i think 1600. And shame on u o Murtaddin. U help this Coalition against the Muslim

Observers say the deaths of these innocent women and children will be considered as ‘collateral damage’ in the War on Terror by the United States. In October 2015, a United States Air Force AC-130U gunship attacked the Kunduz Trauma Centre operated by Médecins Sans Frontières in Afghanistan. More than 70 people were reportedly killed. The United States later issued a statement that the attack was due to human and technical error. The incident has since been forgotten. The United States has been left off the hook for that heinous crime.

This article (Many Civilians Die as U.S.-Led Airstrike Hits Children Hospital in Syria) is a free and open source. You have permission to republish this article under a Creative Commons license with attribution to the author and AnonHQ.com.