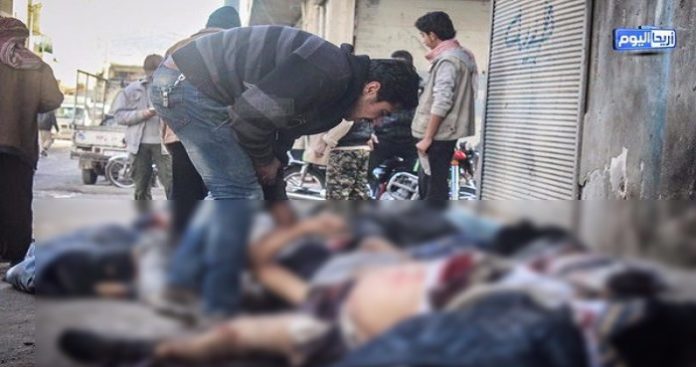 Local residents living in northern Syria have told journalists that airstrikes being carried out by the International Coalition Forces led by the United States against the so-called Islamic State of Iraq and Syria (ISIS) have killed more than 200 civilians in the past two months.

At the end of May 2016, the coalition forces started a special air campaign against ISIS in collaboration with the Syrian Democratic Forces (SDF) in northern Syria. The SDF is an alliance of Kurdish, Arab, Assyrian, Armenian, Turkmen and Circassian militias fighting in the Syrian Civil War against the Syrian government and ISIS. The SDF has full support from the United States. First to bring the attention of civilian deaths from the coalition airstrikes in northern Syria was the United Kingdom-based Syrian Observatory for Human Rights (SOHR).

On July 20, SOHR announced that 56 civilians, including 11 children were killed in airstrikes by coalition forces in the Tokhar area in the northern city of Manbij, Aleppo province. The SOHR also revealed that 10 other civilians, including four children were killed by coalition airstrikes in separate incident in the village of Hamira, in the southern suburbs of Manbij.

SOHR then totaled the number of civilians killed within the two months the airstrikes began in Manbij at 167, admitting that the number could be higher as it did not get full access to areas hit by the strikes. This made journalists to visit the Manbij area to assess the situation. Local residents seized the opportunity to tell the world the horror they have been experiencing for the past two month since the bombardments by the coalition and SDF started in the area. Residents said the area has been a death zone for the population, especially for women and children.

A community leader in Manbij, Hasan al-Nifi told Al Jazeera in an interview that the number of civilians killed in the area by coalition airstrikes is higher than what the SOHR published. “It seems that the Syrian Democratic Forces under the leadership of the International coalition which is in charge of planning have decided to adopt a scorched earth policy. Manbij is full of residents, a quarter of a million residents, used by ISIL as human shields. Yesterday the coalition struck al-Zahuna neighborhood, where more than 23 people were killed. Then it struck the western gate of the city, killing people. Today the residents of Tokhar woke to a horrific massacre. The death toll rose to 212 and the numbers are rising”, Mr Al-Nifi told Al Jazeera amid tears.

Although these heinous killings have been happening in Syria, the coalition forces led by the United States have kept mute over the incident, until the SOHR brought the matter to the attention of the media Back in Washington, journalists tried to get more information on why the airstrikes are causing casualties to civilians at that rate.

The United States Central Command confirmed to Al Jazeera that it has, and still conducting airstrikes in the Manbij area. Surprisingly, the Command said it is unaware of any civilian casualties, and that it will be able to comment further after it has fully investigated the matter.

According to observers monitoring the situation in Syria, the Aleppo province has become the worse affected area in the war in the past few months. It is said Syrian government troops have been trying to push rebels back from the province. ISIS is fighting both rebels and government troops. Coalition forces claim to be fighting ISIS, supporting rebels. This circular fight among the warring factions has resulted in complete chaos and confusion in the province, making civilians in the area bearing the brunt of the war.

@Raqqa_SL @UnknownAkkari i think 1600. And shame on u o Murtaddin. U help this Coalition against the Muslim

Media estimate of the death toll since the war began in 2011 put the number at 280,000. However, recently, the United Nations special envoy to Syria, Staffan de Mistura estimated that the actual death toll could be as high as 400,000. More than half of the country’s 22 million people have been forced out of their homes.

This Article (Local Residents In Northern Syria Confirm US-Led Airstrikes Have Killed More Than 200 Civilians In Past Two Months) is free and open source. You have permission to republish this article under a Creative Commons license with attribution to the author and AnonHQ.com