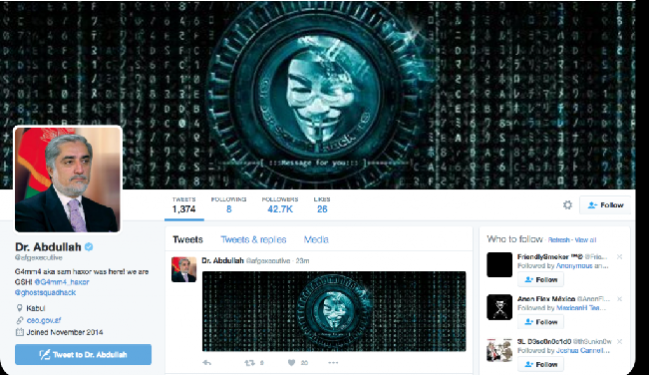 This weekend, Ghost Squad Hackers infiltrated the Afghan Government Registry web site, retrieved its data (including sensitive log in information), defaced the site and took over Afghan Chief Executive Officer Adullah Abdullah’s verified Twitter account.  One of the members, known as G4mm4, then went on to defaced the Twitter page and Tweet out several messages to his +42k followers, including the message “I prefer dangerous freedom over peaceful slavery” along with #EnlightenmentMovement. GSH later Tweeted back at Abdullah asking “can you hear me now?”

#Enlightement or #EnlightenmentMovement refers to a newly-founded social movement spreading across social media on behalf of the Hazaras people, one of Afghanistan’s largest ethnic minorities – a group that accounts for roughly 20% of Afghanistan’s overall population. This July 23rd, the Hazaras were target by a suicide bombing attack at the hands of the Islamic State during a large protest in Kabul – killing 80 and injuring over 200 more. It was a senseless act of violence against a peaceful community, which was even condemned by the Taliban.

Dating back to the 13th century the Hazaras, a Shia minority, have been persecuted against by the Pakistani and Afghan Sunni majority. Only since 2001, after the Taliban were removed from political control over the country, were the Hazaras people even allowed to have a political voice/presence in government.

In a country already stricken by war, poverty and a lack of resources, the Hazaras people have especially struggled over the years. Following the most recent attack on a peaceful gathering earlier this July, the community began searching for something to rally around – thus the #EnlightenmentMovement began.

Following the attack, victims’ families and the community at large took to social media to expres themselves to one another and the world. People vowed to unleash an “online revolution” to educate people about the plight of the Hazaras people, the current state of affairs in the Afghanistan, and in doing so, bring people together to spurn change. Though many in the Hazaras community have limited access to technology, this past Friday, July 30th, #Enlightenment was the top trending hashtag in Pakistan and Afghanistan, receiving 0ver 380,000 tweets in one day.

The day after this movement began to trend, Ghost Squad Hackers engaged in their own brand of hacktivism in solidarity with this movement. In an interview with Hackread, representatives from Ghost Squad Hacking Group said they hacked “Dr Abdullah’s Twitter account to raise voice against ongoing corruption, large-scale drug deals and the illegal American presence in the country leading to a worldwide chaos especially for neighboring countries.”

Later in the interview Ghost Squad went on to explain the detail behind the attack, how they gained access to the accounts, stating that they “found an exploit in the government server and pulled every login we could we have more also but he (Dr Abdullah) was not using phone restriction and 2FA was also not enabled.” Prior to taking over Abdullah’s Twitter account, Ghost Squad hacked the Afghan Public Credit Registry and defaced the site, the same site they pulled the Twitter log in information from.

Members of AnonOps IRC reached out to AnonHQ News, outraged that local media outlets in Pakistan and India were reporting that ISIS was responsible to the hack of Dr Abdullah’s Twitter and asked us to set the record straight.

As previously reported, Ghost Squad split off from a larger group of hackers, who then went on to form the United Cyber Caliphate – the supreme hacking group of the Islamic State. Ghost Squad left because they refused to support the Islamic state and now spend the majority of their time fighting against and exposing members of ISIS. Any report you hear saying that ISIS is responsible for the hack of Abdullah’s Twitter account is absolutely false.

When asked if the group had anything to add about the U.S.-Afghan drug trade, Se!ge explained “Afghanistan government is in the USA pocket selling heroin from the poppy fields in Afghanistan, We know the Afghan government is heavily involved in the drug trade as much as the Taliban is. The president of Afghanistan is monetarily corrupt and so is the CEO. Ghost Squad Hackers will not tolerate corruption in any form. We see through the lies and know their relationship with the U.S. Government.”

Earlier this month, President Obama signed a 1.1 billion dollar initiative to “combat the heroine epidemic in America.” Several other states throughout the country are independently trying to pass their own version of this bill on the state level and local level. According to federal statistics, since 2001, heroine related deaths in the United States have spiked over 500%.

In 2001, the U.S. army invaded Afghanistan when the War on Terrorism began and it just so happens that Afghanistan is responsible for 90% of the worlds production. See the connection we are making here? Think that this is ‘just a coincidence’?….

This article (Ghost Squad Hacks Afghan Government in Protest of Ongoing Corruption and U.S. Drug Ties) is a free and open source. You have permission to republish this article using a creative commons license with attribution to the author and AnonHQ. Join the conversations at www.anonboards.com.