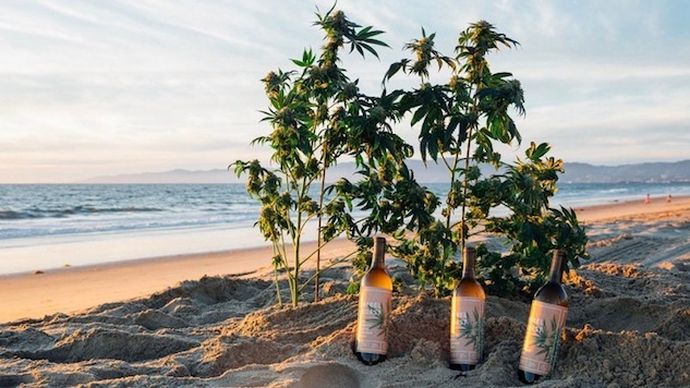 Rebel Coast Winery, a Californian-based company, is set to start selling wine made from marijuana in U.S. states where recreational use of the plant is legal. Sauvignon Blanc, the alcohol-free, cannabis-infused wine, will hit the markets in early January 2018.

“Rebel Coast’s makes this fascinating brew the old-fashioned way from Sonoma fruit. Then the alcohol is removed and replaced with 16 milligrams of organic tetrahydrocannabinol (THC), the active ingredient found in cannabis responsible for a euphoric high. The infusion incorporates cannabis terpenes, imbuing the wine with a distinctly weed-tastic aromatic profile.”

Chip Forsythe, Rebel Coast CEO and co-founder, says the company will roll out pot-infused rosé as well as an elevated sparkling wine in 2018. Customers can pre-order Sauvignon Blanc bottles on the company’s website for $59.99.

“After one glass you won’t be thinking your couch is a hippo with short legs or anything. Our goal is not to kill you after you’ve had a few glasses. The goal is to get giggly and naked with someone. We set out to mimic the experience you’d find with traditional wine; a couple glasses will put most people in a great place,” Rebel Coast said in a statement. In the United States, medical marijuana is legal in 29 states, plus the territories of Guam and Puerto Rico, and the District of Columbia, as of April 2017.

In a recent groundbreaking report, the World Health Organization declared that cannabidiol — the relaxant property of cannabis used in medical marijuana — is beneficial for cancer, epilepsy, Alzheimer’s, Parkinson’s and many more diseases, and should not be a scheduled drug.