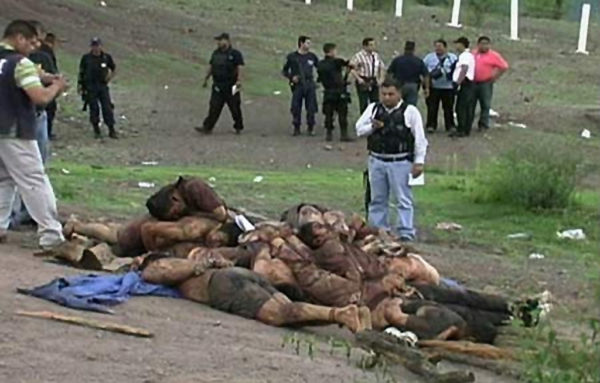 Mexico is among one of the places in the world where organized crime, such gang killing, is very common. There are some areas in the country that are very dangerous to unarmed civilians, with violence rampant. Armed gangs do what they like in these areas.

Local media reports from the country have revealed that the remains of more than 600 bodies have been exhumed in an area considered as one of the most dangerous places on Earth. According to the reports, the discovery may become Mexico’s largest mass grave found to date. A Non Governmental Organization representing the relatives of missing persons, called Grupo VIDA, is said to have led the initiative to retrieve the bodies from the mass grave.

Grupo VIDA said the place where the bodies were discovered appears to be a crime scene, but was unable to suggest the possible year the brutal crime was committed. The bones, teeth, clothing and footwear of the victims were found lying in the site.

According to a representative of Grupo VIDA, Silvia Ortiz, the bodies have been handed over to forensic experts for further identification.  Ortiz further explained that members of the Attorney-General’s office of Mexico, its forensics unit and the National Human Rights Commission, are involved in gathering the remains for the identification. Although the bodies are yet to be examined properly, observers say it is likely to become Mexico’s largest crime related to drug violence.

In February 2012, many mass graves containing the bodies of at least 340 victims believed to have been brutally massacred, were discovered near the city of Durango. The discovery sparked fear among local residents in the area. But even before the discovery near Durango, in 2011, 193 people were reportedly killed and buried in eight graves, reportedly by the brutal Los Zetas drug cartel, at La Joya ranch in the San Fernando municipality.  An investigation into that appalling massacre found that female victims had been raped before being killed. The male victims on the other hand, were forced to fight each other to the death, in contests similar to the gladiator fights of ancient Rome.

In 2014, 43 students from the Ayotzinapa Rural Normal School went missing in the city of Iguala, in Guerrero state. This incident sparked protests across the country, with protesters saying the government has failed to protect its citizens from criminals in the country.

The Mexican Human Rights Commission (MHRC) charged with investigating the disappearance of the students said in 2015, that it has obtained witness testimony of the incident. The MHRC alleged that federal police officers had been at the scene and did nothing when local police abducted the students. This announcement sparked fresh protests in Guerrero state. However, despite the protests, the status of the students is still largely unknown. Their families have been grieving since the incident.

Even before this current mass grave was discovered in San Pedro, the country’s officials had said they have discovered 3,500 body parts at an unnamed ranch site in the country. Officials said they did not name the place where the discovery was made, only because the bodies have completely deteriorated. It is said many of the victims were burnt years ago by criminals trying to destroy evidence of the mass killings occuring.

This article (Mass Killing: Mexico Discovers Over 600 Bodies Buried in Mass Grave) is a free and open source. You have permission to republish this article under a Creative Commons license with attribution to the author and AnonHQ.com.