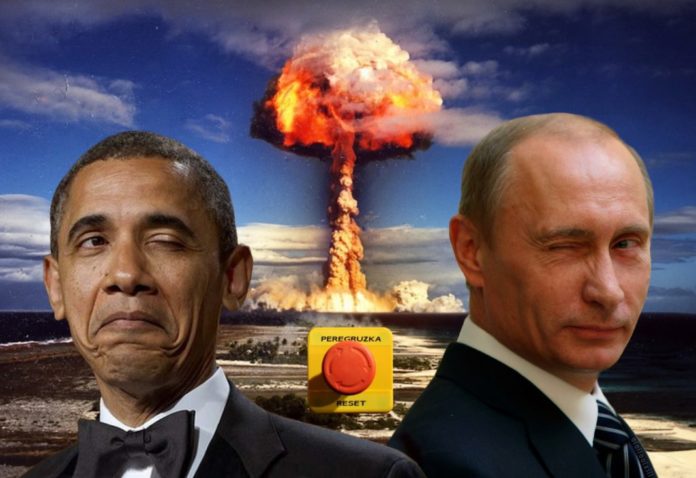 The world is being fooled into believing by the United States of America and Russia, as well as the fear mongering media, that the two countries are ready to destroy humanity with World War III. However, here are a few questions you must ask – or facts you must ponder over – before you believe the threat of WWIII is real…

How Do You Know WWIII is on the Horizon?


Because of the way facts have been misreported. Consider these stories:

It is no secret that China considers the United States as the force behind the Philippines’ move to take the South China Sea to the Permanent Court of Arbitration, which ultimately ruled that China’s claim in the South China Sea is invalid and unlawful.  However, since China deployed warships and submarines close to the disputed area and even conducted extensive live ammunition drills, the mainstream media twisted Chinese Defense Minister Chang Wanquan’s words to convey that he called for citizens to prepare for a “people’s war at sea” to defend national sovereignty and territorial integrity.

After the United States severed diplomatic ties with Russia over Syria following the collapse of a cease-fire agreement, Russian authorities conducted a massive civil defense drill involving 40 million people. The mainstream media was quick to term the exercise — held annually since 2012 on October 4, which is Civil Defense Day in Russia (in fact, it involved over 60 million people in 2013) — as the country’s way of preparing its citizens for a possible nuclear war with the United States.

The so-called responsible media further tried to create panic by claiming that the country had already built underground shelters to protect over 12 million people in Moscow, in case there is an attack from the United States (well, Russia is not the only country who has underground shelters to protect its citizens during natural or man-made disasters).

According to the mainstream media, since the United States is losing the proxy war with Russia in Syria, it aims to overthrow the Syrian government that has the Russian backing. Since Russia deployed its nuclear-capable Iskander missiles at Kaliningrad, which borders Estonia, Poland and Lithuania (NATO members), it was reported that the United States tested two dummy nuclear bombs in the Nevada desert to show its military might. The world went berserk after it was reported that Pentagon finally confessed that WWIII was inevitable and that it will be extremely lethal and fast.

Is the Threat of WWIII Real?

Highly unlikely. Because friendly nations do not go to war over ego – or non-issues. Consider these facts:

China is United States’ largest goods trading partner with $598 billion in total goods trade during 2015. Goods exports totaled $116 billion; goods imports totaled $482 billion. Chinese companies are expected to invest $20 billion to $30 billion in the United States in 2016, compared with $15 billion in 2015 and $11.9 billion in 2014. Despite the Ukraine/Crimea related sanctions, the bilateral America–Russia trade turnover in 2014 amounted to $29.2 billion, which is 7.2% higher in comparison with 2013. Russian exports to America was $18.5 billion, while American exports to Russia was $10.7 billion.

The government of United States cannot go on a full-scale war with Russia because its astronauts are depended on Russian Soyuz flights to reach the International Space Station. The Pentagon will need to buy up to 18 more Russian-built RD-180 engines to power rockets carrying U.S. military satellites into space until at least 2022. Though NASA is banned from engaging in bilateral agreements and coordination with China regarding space, it is in the interests of U.S. national security to engage in space cooperation with China.

Beijing is on course to build a massive 8000-mile high-speed train line connecting China, Russia, Canada, and the United States via a 125-mile underwater tunnel for at least $2 trillion. The entire trip is expected to take two days, with the train traveling at an average of 220 miles per hour. On its part, Russia is planning the world’s greatest superhighway connecting the country’s eastern border with the American state of Alaska, crossing a narrow stretch of the Bering Sea that separates Asia and North America. Even if WWIII Happens, What Would They Get?

As far as Syria is concerned, if the Cuban missile crisis, the Kosovo War, Iraq, Afghanistan, Libya, Crimea, Palestine, and even Cold War could not incite WWIII, do you really believe Syria can? If India and Pakistan — two nuclear powers with all the reasons to go on war with each other — can avoid a conflict with global implications, why can’t America, Russia, and China?

Then Why are They Hinting at WWIII?

To fool us. To deflect from real issues they are accountable for. The United States has failed to honor its commitment to lift anti-Iran sanctions; ensure freedom of trade; and encourage scientific, technological, and business ties between Iran and Western countries. NATO countries have failed to meet defense spending promises.  As of 2016, the United States spends more than $600 billion annually to fund its military forces and Overseas Contingency Operations, which is about 40% of the world’s military expenditures.

According to the 2015 Country Reports on Human Rights Practices, Russia’s authoritarian government restricts citizens’ right to choose their leadership in free and fair elections; selectively prosecutes racial, ethnic, religious, and sexual minorities and migrant workers; deny due process to defendants in politically motivated cases; and fails to protect human rights. For more than a decade, Russia has been attempting to diversify, innovate and modernize its economy, but has failed disastrously; calls to develop long-neglected sectors of the economy continue unheeded.

Do You Think the “At-War” Countries Can Afford the Real Cost of Mutually Assured Destruction?

The First World War killed over 38 million people and cost about $186 billion in direct costs and $151 billion in indirect costs. The Second World War killed over 60 million people and cost $341 billion to the U.S. and $192 billion to the Soviet Union alone, in 1945. The U.S. has killed more than 20 million people in 37 “victim nations” since World War II. Russia is not at war with anyone. America is. However, does the country really need direct confrontation with Russia to unleash new terror? And, is Russia really ready for WWIII?

Putin is in no respect prepared for a conventional war. His country could not afford it, is not adequately equipped to conduct it, and it would backfire spectacularly. This inward-facing propaganda is intended to stoke panic and fear within his own population, very much in keeping with how Putin has conducted himself so far.

Corruption, censorship, national debt, police atrocities, 9/11 conspiracy theories, US presidential elections, and the petrodollar are a few of the numerous issues the two countries want to shift your focus from and make you believe that WWIII is imminent because of tensions in Syria  and at the South China Sea.

The possibility of complete annihilation provides a huge disincentive to launching and expanding total wars.  Sure, accidents could happen, but the possibility is incredibly remote. More importantly, nobody in power wants to be the cause of Armageddon.  The level of economic adaptation — even for large countries like Russia and the United States with lots of land and natural resources — required to adapt to a world war would be crushing, and huge numbers of business and livelihoods would be wiped out. It is clear at least that the incentives for world war are far lower than they were in previous decades, and the disincentives are growing.

This could very well be called Cold War II, but that won’t serve America’s or Russia’s purpose.  The bullies are just fooling around. How do disaster preparedness drills suppose to mean WWIII? How do only Syria and South China Sea become bone of contentions and not Kashmir, Palestine, Saudi Arabia, Colombia, ISIS or North Korea?

Don’t close your eyes and think tensions are not there.  Instead, open your eyes and see why they are there.  Stop this fear mongering. Don’t let a few countries decide your future, at least not through war.

Related: How to Prevent the Third World War

This article (You Have Been Fooled Into Believing WWIII Is Real – Here Is The Proof ) is a free and open source. You have permission to republish this article under a Creative Commons license with attribution to the author and AnonHQ.com.