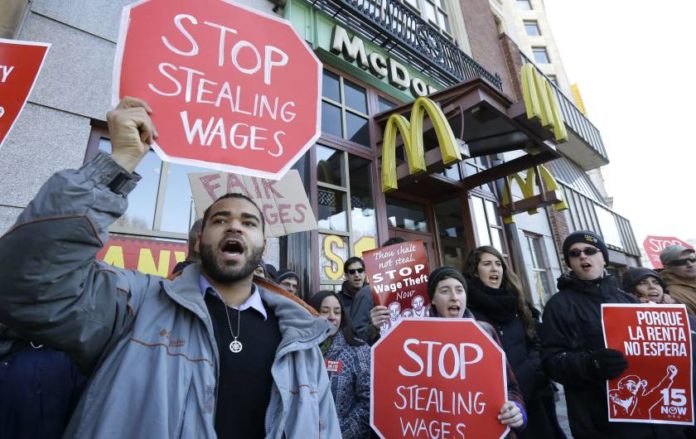 Under Thompson’s reign, McDonald’s has seen sluggish growth and loss of investor confidence. The resignation comes after a year of abysmal financial performance. 2014 was the first time the corporation experienced an annual decline in same-stores sales globally in over a decade. The company’s stock price soared on the news of Thompson’s resignation. After 25 years with the company, and fewer than three as chief executive, Don Thompson stepped down last week. McDonald’s CEO has resigned. But McDonald’s next CEO will additionally face numerous advertising problems, widespread labor unrest, and legal threats to its business model. Thompson’s exit is being widely blamed on the company’s weak financial performance under his stewardship. McDonald’s CEO Don Thompson, one of just seven African-American chief executives among the Fortune 500 companies, is stepping down less than three years after rising to the top job. McDonald’s ability to compete with so-called “fast casual” food stores with more customizable menus and fresher ingredients will drive its near-term performance for its shareholders, and how Thompson’s replacement tackles those core business questions will probably be the primary determinant of his or her lifespan in the CEO’s chair.

“The company was not going to be fixed until Don Thompson (left),” another industry analyst told Crain’s. Some analysts directly faulted Thompson’s leadership for the company’s poor financial performance. “Don got fatally behind the last couple of years,” a restaurant specialist from a management consulting firm told the Journal.

Over 100 McDonald’s workers were arrested at the company’s annual shareholder meeting in Illinois last summer, with police in riot gear deployed to protect the corporate campus from strikers and protesters. But whoever ultimately replaces Thompson will also have to tackle some more abstract types of damage to the brand, which has become the face of low-wage worker exploitation as fast food worker strikes spread from a New York McDonald’s to hundreds of cities around the country.

As recently as last summer, workers alleged that they had been fired or otherwise illegally disciplined by the company for participating in strikes. Workers demanding a $15 hourly wage and the right to unionize have taken an increasingly radical approach toward McDonald’s. At a gathering last spring, workers from the movement resolved to start using civil disobedience as an organizing tactic. McDonald’s unabashed appetite for profit, at the expense of food fit to serve and at the expense of its poorly paid workers, is falling out of vogue — and the company is paying the price. The company isn’t sinking because it needs better brand management, but because flavor across the country is transforming. But McDonald’s needs more than a dapper new captain. The company’s chief brand officer, Steve Easterbrook, is set to replace Thompson. He’s expected to draw from his experience polishing McDonald’s reputation for its U.K restaurants. Depictions of assembly-line preparation and the extraordinary toll that Big Macs take on your health have been documented in popular books and documentaries such as Fast Food Nation, Super Size Me and Food Inc. Since the turn of the millennium, fast food has endured a growing barrage of criticism for its health and preparation practices, and McDonald’s has become centerpiece of its most strident indignation. People like their food fast, but not that fast: Industry observers have noted McDonald’s struggles with sales for years now, and there’s an emerging consensus that profoundly unhealthy food is no longer as marketable as it once was.

Global foodie and television show host Anthony Bourdain once said that a Chicken McNugget is the most disgusting thing he’s ever eaten. Photos of McDonald’s burgers that never seem to decompose make the rounds on the Internet regularly. In recent years, Chipotle has outshone McDonald’s in sales and profit growth, and it’s widely touted as the new standard for fast food. It’s worth noting that McDonald’s once had a 90% stake in Chipotle, but divested after Chipotle’s founder toured a McDonald’s chicken farm and found it to be “absolutely the most disgusting thing” he had “ever seen in his life.

Fast food experts have compared the chain’s performance to its competitors and pointed to the success of restaurants that use fresh ingredients from healthy sources in recent years. Even if people are eating something they consider a greasy indulgence, they’re increasingly discerning about the nature and origins of that greasy indulgence. The rise of Shake Shack, whose food is a bit more expensive than McDonald’s on average, has been attributed to customers’ preference for ingredients that haven’t been processed in a factory. McDonald’s has borne the consequences for its disregard for its own customer’s health. That tour isn’t cited as the reason for their parting ways, but it serves as an example of their differences. McDonald’s is probably the most frequent backdrop for strikes and rallies organized by employees who are living on poverty-level wages. McDonald’s has been one of the central targets of the Fight for 15 Campaign, a movement by low-wage workers protesting for a $15 per hour wage and the right to organize into unions. It is a company that has advised its employees to manage their budgets by getting a second job and living without necessities like heating. It’s a company that has been slapped with 78 charges of labor violations by the National Labor Relations Board, a sign that McDonald’s may no longer able to get away with its exploitative practices by dumping all responsibility on franchise operators. Americans are increasingly aware of the dire conditions that McDonald’s workers face. But that portrayal of life as a fry cook relied on some dubious conditions, like spending zero dollars per month to heat a home, paying $600 in monthly rent, and finding a second job. The sample budget provided by the company purported to show how a McDonald’s worker could not only survive on their wage, but thrive, setting aside savings for themselves and their family.

In the summer of 2013, ThinkProgress reported that the company was maintaining a website full of implausible budgeting tips for workers. While the campaign is now industry-wide, a couple of major stories have helped to associate McDonald’s with the economic insecurity that’s driving those workers to strike. Near the end of that year, the company quietly took that site private, citing “unwarranted scrutiny and inappropriate commentary. ”. McDonald’s frontline workers earn less than $8 per hour on average according to Glassdoor, and the average salary for fast food workers across the industry is less than $19,000 per year. Recent research from the University of Massachusetts-Amherst implies that the fast food industry as a whole could absorb a minimum wage increase to $15 an hour without layoffs or reducing profits.  “Wage theft is rampant on the market,” according to a worker survey from last spring. While those are poverty wages for many, Thompson had said the company pays “fair and competitive wages.”

Franchising agreements have long protected corporate parents from responsibility when their franchisees are found guilty of violating labor law, but the National Labor Relations Board now says that McDonald’s exerts so much control over local operations that the corporation itself can be charged in such cases. The company’s failure to address its workers’ demands may ultimately destroy the legal arrangements fast food companies use to avoid liability for the labor conditions their workers face. Labor organizers know that if you take down the head of the pack, then it’s more likely that others in the industry will learn. While virtually all fast-food workers in the United States are underpaid and face obstacles to union organizing, McDonald’s is considered the most important one of the lot to target. If he thinks that new packaging and messaging can do the job, he will likely oversee the corporation’s continuing decline. And right now, it seems to be working. The new CEO of McDonald’s will have a lot on his plate.