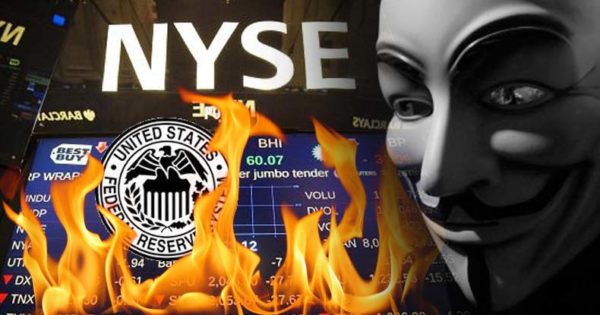 Details are now emerging that the online hacktivist group, Anonymous has attacked and successfully shut down a number of banking and financial institutions belonging to the global elites, who are known as the 1%.

Anonymous has therefore taken a stand, making it a priority to continue to destabilize the activities of the 1% in order to bring justice and fairness in the distribution of the world’s scarce resources. It is against this background that Anonymous has launched the operation code named ‘Icarus’, to go after the cabals. The Free Thought Project reports that OpIcarus has recently taken offline the World Bank, the New York Stock Exchange, five United States Federal Reserve Banks and the Vatican. These institutions are considered prestigious in global governance, and the attack is a milestone achievement for the hacktivists.

However, the global corporate media has refused to report on the success of the operation, fearing that it will gain prominence and entice more and more people to join the Anonymous movement.

The Anonymous group spearheading OpIcarus, Ghost Squad Hackers, has successfully taken more than 30 central banks offline, including many in the heart of the Western Capitalist Imperialist Empires. Anonymous first launched OpIcarus in early May. The movement announced the beginning of a 30-day hacking campaign against central bank sites across the world. The announcement of the operation came with a video release.

Since the announcement was made, the scope and magnitude of the attacks have increased exponentially, with Ghost Squad Hackers, a number of Sec groups and BannedOffline coordinating attacks – each focusing on separate financial institutions in an effort to maximize the number of targets hit.

A representative of the attackers has already clarified that the operation is in no way intended to impact individual accounts held within the banks, explaining that OpIcarus is directed solely at the 1% perpetuating injustice and corruption in the world.

“We would just like to make it very clear that all targets of #OpIcarus have been Rothschild and BIS central owned banks. In fact most of the targets so far such as Guernsey, Cyprus, Panama, Jordan, British Virgin Isles, etc are in the top 10 places of tax havens for the elite. No on-line consumer accounts were harmed, no ATM’s were blocked and no personal client data was leaked. This has been a protest against the Central Banks and the 1%. No innocent or poor people were harmed,” the representative told the Free Thought Project.

Arguably, the most successful attacks took place around the middle of May, when Anonymous successfully shut down the Bank of England. The attack reportedly took down the internal email server of the bank. The Bank of England also serves as the central bank of the United Kingdom.

The central banks of the following countries have also come under attack as part of OpIcarus: Jordan, Macedonia, Venezuela, Morocco, Bosnia-Herzegovina, Mexico, South Korea, the United Arab Emirates, Tunisia, Trinidad and Tobago, the Philippines, Iraq, Montenegro, and France. The Swiss Bank of Compagnie and the Bank of Monegasque in Monaco were also hit. It is believed more than 250 Gbps DDoS were released, downing the websites of these banks and financial institutions.

The World Bank, the United States Federal Reserve Banks, the Bank of France, the Bank of England, and the Vatican are among the most high-profile institutions to have suffered the wrath of Anonymous, observers have said. Although these institutions have refused to comment on the attack, it is believed the attacks have had a significant effect on their profits. According to banking and finance experts, time is very essential to the banking and financial institutions. Therefore, disrupting their websites for hours means they are losing money every passing second.

Currently, Anonymous is focusing its attention on the economic crisis in Venezuela. Although the country’s central bank was hit in the attacks, Anonymous released a statement saying:

“Greetings citizens of the world, we are OpIcarus a collective of citizens from around the globe working on exposing the 1% through the global banking systems. The elite are responsible for the corruption currently taking place in all governments, media, drug cartels, sex trafficking and money laundering. This last week we have had success in taking down the banking systems of the Bank of International Settlements, the World Bank, the Vatican, Morocco, Macedonia as well as the Central Bank of Venezuela. We stand with the people of Venezuela as they protest their corrupt government and all should expect our support through operations during these uprisings wherever they may arise. We are the people. We stand with the people. We support the people.”

We are closely monitoring proceedings. We will report on the latest. Just stay with us, and expect us.

This Article (What The Media Will Not Report: Anonymous Shuts Down New York Stock Exchange, Fed Reserve, World Bank, & Vatican) is free and open source. You have permission to republish this article under a Creative Commons license with attribution to the author and AnonHQ.com