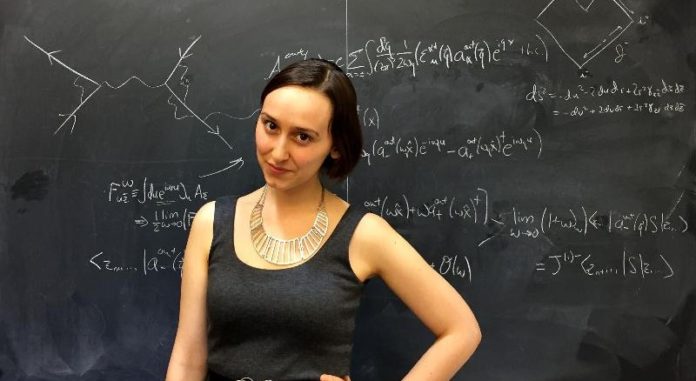 She was 12 when the first generation Cuban-American co-piloted FAA1 at EAA AirVenture Oshkosh. In 2008, the 14-year-old sought MIT’s approval for a single-engine plane she’d built – she took her first US solo flight in that kit aircraft in 2009. In 2015, she was cited by Forbes as one of the “30 under 30 in Science”. At 22, Sabrina Pasterski – who is not on Facebook, Twitter, LinkedIn or Instagram and doesn’t own a smart phone – is an MIT graduate and a Harvard Ph. D. candidate, is touted as the next Albert Einstein, and has job offers from Blue Origin, an aerospace company founded by Amazon.com’s Jeff Bezos, and NASA. It’s not hype – her papers have been cited by the likes of Stephen Hawking and Andrew Strominger.  Stephen Hawking follows the physics genius’ research that seeks to explore black holes and space time, with a focus on explaining gravity in the context of quantum mechanics – areas of study tackled by Einstein and Hawking before her. Her next project could help us understand the universe.

“Hopefully I’m known for what I do and not what I don’t do.” A poignant sentiment. https://t.co/IYa6E4cWSZ

She was wait-listed when she first applied to MIT, until MIT Professors Allen Haggerty and Earll Murman viewed the video of the plane she was creating. With their support, Pasterski was ultimately accepted, later graduating with a grade average of 5.00, the highest possible score. Haggerty told Yahoo!: “Our mouths were hanging open after we looked at it. Her potential is off the charts.” Peggy Udden, an executive secretary at MIT, added: “I couldn’t believe it, not only because she was so young, but a girl.”

Pasterski, who has never had a boyfriend, an alcoholic drink or a cigarette told OZY:

“Years of pushing the bounds of what I could achieve led me to physics. Physics itself is exciting enough. It’s not like a 9-to-5 thing. When you’re tired you sleep, and when you’re not, you do physics… A theorist saying he will figure out something in particular over a long time frame almost guarantees that he will not do it. I’d rather stay alert, and hopefully I’m known for what I do and not what I don’t do.”

Pasterski has been granted a $250,000 fellowship with the Hertz Foundation and a $150,000 fellowship (both through 2020) with The National Science Foundation. Her achievements include “spotting elegance within the chaos” and “motorcycling, aircraft building and the best Speed Demon player around”. She says: “Every physicist should learn to ride a motorcycle. It gives one a certain physical intuition, as does flying a small airplane.” She told the Tribune recently:

“It was an interesting experience because it might have actually pushed me a little bit to re-evaluate where I wanted to be. (It) was a bit of a blow. At some level, I’m glad that I didn’t (apply to more schools), because if I had a safety school, I don’t know if I could have pushed myself in off the wait list…

“Oftentimes in retrospect, the thing that’s hardest or perceived to be are the things you end up being most proud of. If you keep that in mind, the fact that you went through it, or made it turn out better for yourself as much as you could, makes something that you are then happy to talk about. The attitude is to take into account: How will you see this a few years down the line?

“I’m harder on myself than other people probably are on me. I definitely feel like I have way more to do. It’s great to get recognition now, but hopefully it builds up to something. I’ll hopefully be right about having some kind of gut feeling that [will become] rather big at some point. Fingers crossed.”

This Article (Meet The Next Einstein — Millennial Physics Genius Sabrina Pasterski) is free and open source. You have permission to republish this article under a Creative Commons license with attribution to the author and AnonHQ.com.