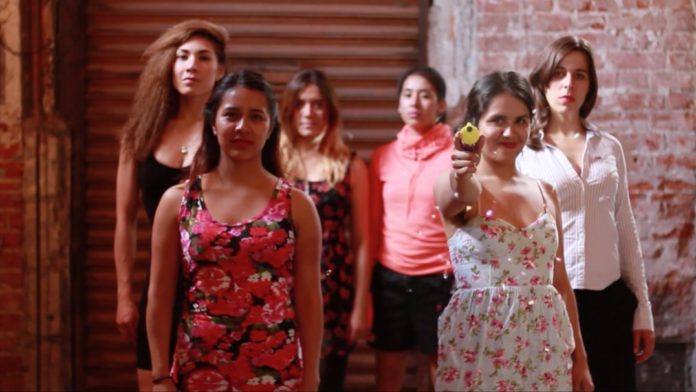 A group of fearless women in Mexico City, dubbed “Las Hijas de Violencia,” or The Daughters of Violence, have found a creative way to decry street harassers and battle violence against women. Every time they see men harassing women in the street, the badass women run after the leering creeps, shoot them with their confetti gun and sing a punk rock song “Sexist Punk” on speakers.

“We recommend that you have fun with it so that you’re not left feeling violated from what happened, and you’re able to move on and still have a great day… We certainly don’t think we’re going to change the world, but we sure know that we’ve changed ours.”

The Al Jazeera Plus video shows a woman singing – “You talk to me as if you were going to rape me. If you do this to me this way, I will respond” – at a man through a microphone.

Mexico’s Harassment Issue“You talk to me as if you were going to rape me.”These Mexican women are fighting street harassers with confetti guns and punk rock.

Mexico has severely high rates of violent crime against women. A 2014 report by the National Citizens’ Observatory on Femicide found that Mexico has the 16th highest rate of homicides committed against women in the world. Only 24% of the 3,892 femicides the group identified in 2012 and 2013 were investigated by authorities, but only 1.6% led to sentencing.

According to a report produced by UN-Women, cases of femicide in the country have seen a steady increase since the year 2007, which had recorded the lowest number of femicides since 1985, but by 2009 the number had already exceeded those recorded on 1985 by about 25%.

“The State of Mexico is the most violent state for women [in the country]. In Ecatepec district, for example, the figures surpass those that for a long time made Ciudad Juarez, the ‘femicide city’. We have exceeded those figures by a lot, with nearly three times the number of female deaths.”

This Article (Mexico’s Badass Women Are Having Fun Fighting Street Harassers) is a free and open source. You have permission to republish this article under a Creative Commons license with attribution to the author and AnonHQ.com.