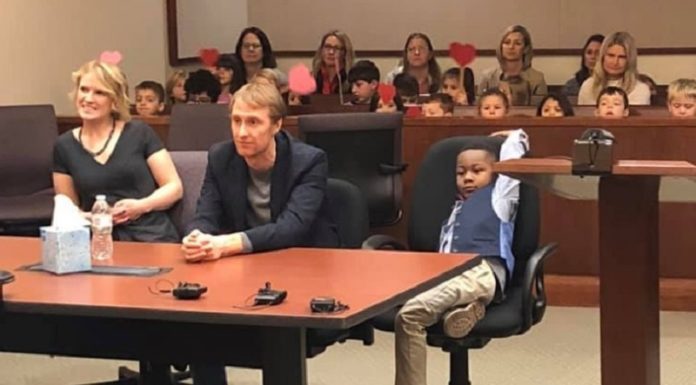 Often when children must show up in a courtroom, it’s an unhappy and alienating, if not tragic, affair—but this was not one of those cases.

A boy in Kent County, Michigan named Michael Clark Jr. was facing an adoption hearing this week, but rather than appearing all by himself he had the strong moral support of his entire kindergarten class.

The children cheered and held up hearts on sticks Thursday as Michael finally became an official part of his family in the courthouse, local television station WZZM reported.

Michael brought his entire kindergarten class with him today to witness his adoption.

The kids were eager to join Michael for his special day, which was planned by kindergarten teacher Kerry McKee, who told WOOD-TV:

“The lesson is put a little love in your heart. We rise when we support others.”

About a year ago, Andrea Melvin and Dave Eaton became Michael’s foster parents. Since then, Michael has enjoyed no shortage of love from his now-permanent parents.

“We were thinking, ‘How can we build our family?’”

Michael then cut into the interview, saying, “I love my Mommy!”

Continuing, Melvin explained that “there’s so many options, right, for building a family these days.”

So glad he got to share his special day! #AdoptionEqualsLove https://t.co/GMvcZhHZn9

Between 4,000 and 5,000 children currently live in foster care in Michigan. Michael was one of 36 children from within the foster care system who was adopted on Thursday, which was Kent County’s 23rd annual Adoption Day.

17th Circuit Court Family Division Judge Patricia Gardner called the day “amazing” as she opened for hearings. The day was full of tears of joy as children united with their new families. Gardner said:

“On Adoption Day, there’s so many emotional stories of how children come to families.”

Santa Claus also joined the day’s events to spend time with the families and various local organizations and agencies.

For Michael’s new parents, fostering him was a matter of conviction as well as love. Melvin said:

“If it’s something that’s crossed your mind, you should consider it and get trained and just see what it’s all about.”