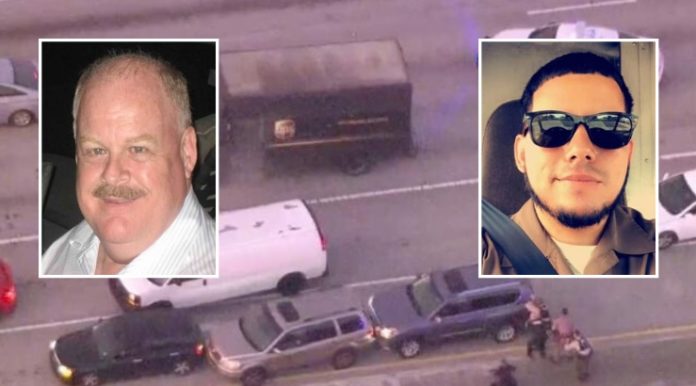 The previously unidentified innocent bystander who was killed Thursday during police shootout in Miramar, Florida has now been identified as Richard Cutshaw.

The 70-year-old, known as “Mr. Rick,” was driving home from work when he found himself in the middle of what has been described as a war zone.

Cutshaw, who was caught in the crossfire, has been described by neighbors as quiet and private, but also funny and willing to help when he could. “He was a good man. That’s it,” said one neighbor who lived next to Cutshaw for 20 years.

According to a senior law enforcement source, a total of 19 officers from five agencies responded to the incident on Thursday. While the total number of shots fired in the incident that left four dead is currently unknown, a source told CBS4 that it could very well exceed 200 rounds.

In what appears set to become a series of shots heard round the world, four people ended up dead at the hands of police after a hijacked UPS truck led law enforcement on an erratic chase in Miramar, Florida.

The deceased include two suspects, a UPS driver who has been identified as Frank Ordonez, as well as an innocent bystander.

On Thursday, an armed robbery at Regent Jewelers in Coral Gables went awry when the silent alarm was triggered at approximately 4:15 pm. At least one woman was hurt during the robbery that soon escalated to the hijacking of a nearby UPS truck, according to Coral Gables Police Chief Edward J. Hudak Jr.

Less than a minute later, police were alerted to shots having been fired across the street at Coral Gables City Hall, with one bullet striking the building, allegedly originating from the fleeing UPS truck, FBI Special Agent in Charge George Piro in charge of the Miami field office, said during a Thursday night briefing. The building went into lockdown after the shooting.

According to officials, the truck then led police on a long chase in which it drove over curbs, made U-turns, and drove erratically while weaving around other vehicles, including those belonging to law enforcement. Dozens of officers were in pursuit during the ordeal that saw the UPS truck speeding through congested streets and intersections. CNN reports that “at one point, the line of emergency vehicles trailing the truck stretched for about half a mile.”

By the time the chase ended, more than 40 emergency vehicles had responded to the incident. Disturbing footage shows police exiting their vehicles and approaching the UPS truck on foot as it came to a stop in heavy traffic. Rather than treat the incident as a hostage situation, police drew their weapons and used bystanders’ vehicles as cover.

As seen in live aerial footage from WSVN, the Ordonez, who according to his brother was covering the route for another driver, left the steering wheel before shots appeared to be fired inside the truck at 5:35 p.m.

According to Piro, both suspects as well as two innocent bystanders were killed during the ordeal. “Unfortunately the suspects are now deceased, but two additional innocent civilians were also deceased,” the agent explained during Thursday night’s press briefing.

“It’s very early in the investigative process, there are a lot of questions that are still unanswered,” he continued.

It remains unknown whether the first shots came from police or those inside the UPS truck and whether or not the driver and bystander were killed by police fire.

And now, family members of Frank Ordonez are speaking out.

Today I lost my brother, because of the fucking negligence and stupidity of the police. Instead of negotiating with a hostage situation they just shot everyone. (Including my brother) please retweet this so everyone can be aware how stupid these cops are. pic.twitter.com/DyFN2ZUoAX

“They murdered him. I hope you can understand that and how I feel because it could have been prevented.”

The driver’s brother, Roy Ordonez, told CNN his brother was an “outgoing and happy” father of two 3 and 6-year-old girls. The 27-year-old enjoyed fishing, playing basketball and video games, and “most of all,” his brother said, “what Frank really liked to do is spend time with his daughters.”

A GoFundMe page that has raised over $60,000 in its first nine hours, was set up to help Ordonez’s family.

Merino, who called the scene “a war zone,” is lashing out at police and questioning their tactics:

The negligence, the irresponsibility, the lack of life, the lack of concern. The disregard for life for the victim.”

“Their perceptions are because they have lost loved ones, so you can’t argue with the way they view things. They’re speaking with pure emotion and, again, I completely understand and I empathize with the loss of their family.”

Social media users were quick to express their outrage and disgust at what many are calling irresponsible tactics by police, as both aerial news footage and shocking footage from those witnessing the scene unfold firsthand began to emerge.

BREAKING: 19 officers fired into a UPS van that was hijacked in south Florida & used to lead police on a high speed chase, reports @DeFede of @CBSMiami who spoke to a senior law enforcement source.
4ppl are dead:
2 suspects
UPS driver
Bystander in car
pic.twitter.com/ZM5nPbmxQj

“We are deeply saddened to learn a UPS service provider was a victim of this senseless act of violence. We extend our condolences to the family and friends of our employee and the other innocent victims involved in this incident. We appreciate law enforcement’s service and will cooperate with the authorities as they continue the investigation.”

Merino, who maintains the police were only protecting themselves, plans to continue speaking out about his stepson’s murder.

“What bothers me is the fact that the police went home that night to their families; to their daughters and sons and their wives. Frank is never coming back. He wasn’t afforded that right—the right that police is supposed to protect all of us—and they didn’t protect him when he most needed it.”

While the FBI remains tight-lipped, Merino says he knows who is responsible—the police.

The incident and deaths remain under investigation by the very agencies involved in the shocking scene that unfolded Thursday evening.