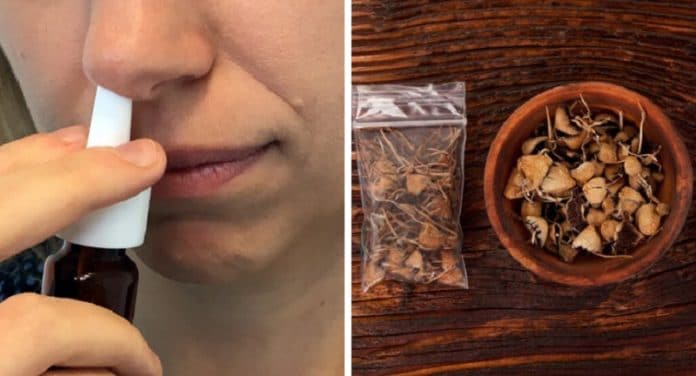 Pharmaceutical companies and other private entities have been making significant investments into psychedelic therapies, especially psilocybin, the active ingredient in many of the most popular “magic mushrooms.”

Psilocybin was first designated as a “breakthrough therapy” by the FDA last year.

And now, one company has an interesting psilocybin-based medicine for depression that they hope will soon be on the market. Silo Wellness‘ new product is a psilocybin nasal spray intended to be used for microdosing. The company says that consuming the substance as a nasal spray will help with some of the side effects typically associated with psilocybin, including nausea.

“We need to be able to give patients predictable dosing so they can self-titrate into the desired levels of sub-psychedelic or psychedelic treatment. We solved the age-old problem with plant- and fungus-based medicine: How do you know how much is a dose? How do you avoid taking too much, like the cannabis edibles dilemma? We also managed to solve one of the common complaints of some mushroom users: taste and upset stomach.”

Despite the FDA’s “breakthrough” designation, the mushrooms that contain psilocybin are still federally illegal in the United States, although some jurisdictions—like Denver—have moved to decriminalize the substance. As a result of the legal status of psilocybin in the U.S., Silo Wellness was forced to develop its nasal spray in Jamaica.

“I love our product and can’t wait until it’s legal in the United States, so we can share it with crime victims and first responders,” Arnold said.

Silo Wellness co-inventor and pharmaceutical product developer, Michael Hartman, hinted that the product will be ready for the consumer market very soon.

“This isn’t a ‘plan’ to develop a product or a ‘plan’ to open a facility. We have real proof of concept and continued research and development underway—not just an idea,” Hartman said.

According to the company’s recent press release, they filed for a provisional patent application in July of this year. The patent is said to be filed under, “Metered dosing formulations of plant and fungal compounds for oral, nasal, sublingual, and topical use.”

“I never thought I would exit cannabis and pivot full time into psychedelics, but they changed my life. I want to share this medicine with the world by making it affordable and comfortable for all. National media didn’t care about psychedelics until Denver passed their decriminalization ballot measure. Before that, everyone thought I was crazy when I told them that we were entering the medicinal psychedelics space in advance of Oregon legalizing in 2020,” Arnold recalled.

Earlier this year, the FDA approved a ketamine-based nasal spray, also for the treatment of depression.