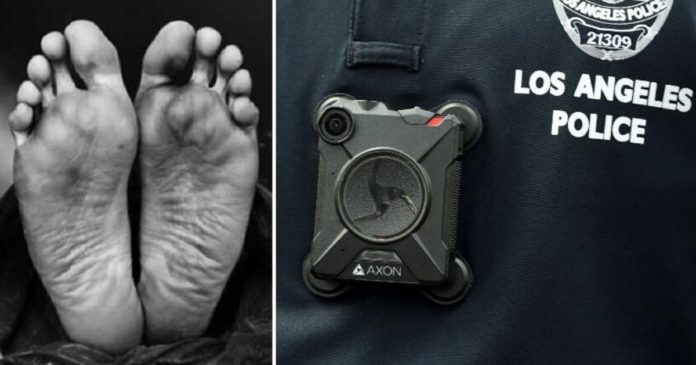 A veteran Los Angeles police officer is facing an investigation after footage from his body-worn camera appeared to show him groping a recently deceased woman’s breasts.

The officer and his partner, also male, had responded to a call about a possible dead body in a residential unit, reports the Los Angeles Times.

When the officers determined that the woman was dead, one of the officers left the scene to fetch something from his patrol car. At that point, the accused officer turned off his body camera before he allegedly began fondling the dead woman’s breasts, LAPD officials claim.

According to a person briefed on the incident who spoke with the Associated Press, footage of the incident was only captured because of the continuous two-minute buffering period that the cameras are equipped with, resulting in the act being recorded during the two-minutes before the camera was turned back on.

Even the Los Angeles Police Protective League (LAPPL), the police union that is typically steadfast in its defense of sworn officers accused of grave misconduct, appeared eager to distance itself from the alleged ghoulish act. In a statement quoted by the Times, the LAPPL said:

“If this allegation is true, then the behavior exhibited by this officer is not only wrong, but extremely disturbing, and does not align with the values we, as police officers, hold dear and these values include respect and reverence for the deceased … This behavior has no place in law enforcement.”

The incident was discovered by LAPD leadership due to routine random checks of bodycam footage, a source close to the investigation told the Times.

LAPD leadership had only reached an agreement last month with the LAPPL for recordings not involving arrests or the use of force to be randomly checked, mainly so that supervisors could seek insights on potential misconduct, biased and rude policing, or other behavior requiring additional training.

However, the source noted, LAPD Central Division management is “furious” over the recent alleged incident which is seen within the department as “way beyond the pale” and “unacceptable.”

The LAPD collects roughly 14,000 recordings per day from the 7,000 bodycams deployed in the field, and over 2.1 million hours are currently stored.

LAPD chief spokesman Josh Rubenstein avoided discussing the details of the case, but acknowledged in comments to Buzzfeed News that an administrative investigation had been launched into the reports that the veteran officer had “inappropriately handled or touched a dead body.” The spokesman added: