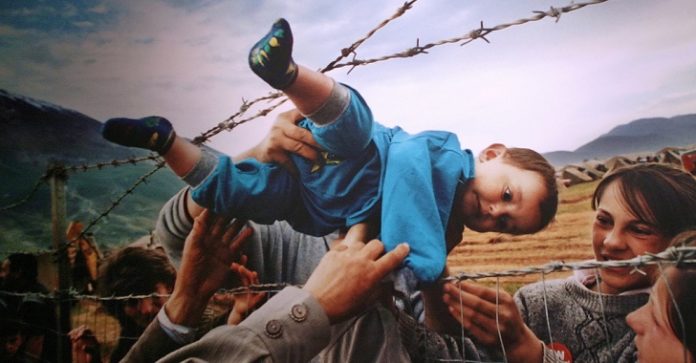 United Kingdom — DISCLAIMER: I just saw a photo taken inside a recently discovered lorry that contained 71 decomposing bodies. And I am angry — very angry.

No one really knows how those people ended up in the lorry found in Austria, but police are claiming to have since arrested some of the trafficking gang. It is almost impossible to imagine what strips someone of their humanity to such a point that they knowingly load 59 men, eight women, and four children into a giant metal box with no ventilation and wire the doors shut.

The assumption so far is that many of those found dead were Syrian.

Since 2011, the war torn country has been almost completely annihilated by a conflict that has been called “the worst humanitarian disaster of our time.”  Beginning with nationwide protests against the regime of President Bashar Al-Assad, the consequent violent crackdown by his government saw thousands take to the streets to demand his resignation. The violence escalated and the country descended into civil war as rebel groups formed to battle government forces.

A particularly grim milestone was reached in January 2014, when the U.N. announced it had stopped counting the dead due to its waning ability to verify sources and produce credible estimates.  The media has since suggested that more than 200,000 Syrians have been killed. To add to the smokescreen of the Western-interest fueled battleground, fingers are regularly pointed at a relentless and skilled propaganda campaign employed in media reports on the war-torn country.

What is clear is that earlier this month Amnesty International accused the Syrian government of war crimes against its own people. U.N. figures report over 4 million registered Syrian refugees and 7.6 million people internally displaced inside the country.

Back to the lorry.

According to the (oversimplified) background on Syria above, it doesn’t take a genius to see that those in the lorry were fleeing for their lives. Everyone in the world has the right to seek protection from persecution and becomes a refugee when fleeing because “one or more of their personal rights” has been threatened.

In contrast, a migrant is one who moves from one place to another to find work or better living conditions (heaven help those with the guts to travel across the globe to improve life for themselves and their families — only to be called scroungers by the nativists).

So those fleeing Syria are refugees, right?

If that is the case, why did almost every single news article reporting on the 71 people found dead in the lorry refer to them as migrants?

If they were Syrian, they are refugees — not migrants. I repeat, refugees. Not migrants.

Those fleeing war are absolutely entitled to seek asylum in safer places. The overuse of the dehumanising term “migrants” — splashed across daily headlines of broadsheets and tabloids— means that writers for the English speaking press are either stupid or simply revel in persistent scaremongering.

It makes sense that politicians throw the label around. After all, “migrant” somehow implies less responsibility than “refugee” or “asylum seeker,” and let’s face it: even the Prime Minister of Britain refers to them as “a swarm.”

Regardless of which direction the rhetoric comes from, using the “migrant” label as frequently as possible assists public brainwashing toward the idea Europe is heading towards some sort of social crisis.

Well, guess what — it’s too late! The crisis already happened and it’s the biggest global displacement since World War II.