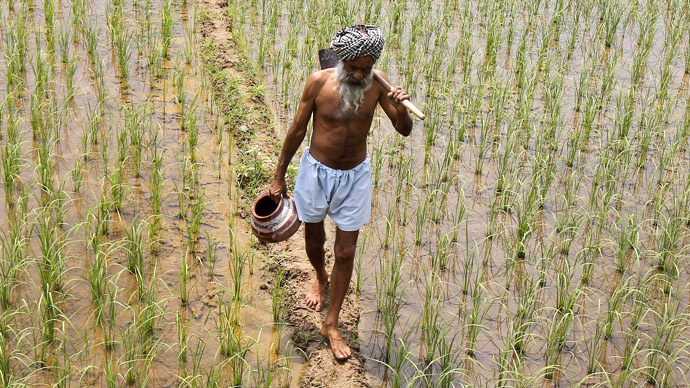 India – There is now a strong tug-of-war going on between India and Monsanto as the nation attempts to safeguard local farmers. This month, the Indian government has cut royalties for GM cotton seeds, capping them at 49 rupees (73 cents on the U.S.) per 450-gram pack of Bt cotton seeds.

Monsanto has retaliated with a threat to “reevaluate every aspect” of its “position in India,” claiming that such cuts (70 percent) are substantial and will undermine its Indian operations.

The uniform pricing for Bt cotton follows several disputes between Monsanto and licensees over payments; fees have currently been uncontrolled. In response to the disputes, the government has stepped in to protect the interests of the local farming communities.

Monsanto has long since had a dubious reputation, with its RoundUp pesticide, through to its production of white phosphorus for the US military; but a lesser known controversy surrounding the company is the suicide rate amongst Indian farmers. After their arrival into the nation’s agricultural industry, Monsanto’s business has “biowrecked” the fields, crops, and lives of farmers.

It was reported last year by the Center for Human Rights and Global Justice, that in 2009 a reported 17,638 farmers committed suicide.  According to the nation crime records, Monsanto is being held accountable for “contributing to over 290,000 suicides by Indian farmers over the last 20 years.” However, on Monsanto’s website they defend their position with Bt (biotech) cotton and the purported link to the sharp increase in the suicide rate.  “Despite claims by those who oppose GMO crops, research also demonstrates there is no link between Indian farmer suicides and the planting of GMO cotton,” the company says.

WikiLeaks have also claimed that an ‘engineered’ move by the US government to coerce EU nations to accept the GM seeds or face “retaliation,” particularly in the response to France when they moved to ban GM corn in late 2007. Cables have been intercepted documenting the EU intentions by Stratfor – a “global intelligence” company headquartered in Texas.

Monsanto is the largest producer in genetically engineered seed. Although there would be many in India and across the world who would gladly see the backs of Monsanto, the Big Ag company persists in its international expansions. Global Research have reported Monsanto’s latest attempt to introduce GM into Europe through the back door of the Ukraine.

This article (Monsanto Threatens to leave India as Govt. Slashes Royalties) is a free and open source. You have permission to republish this article under a Creative Commons license with attribution to the author AnonWatcher and AnonHQ.com.