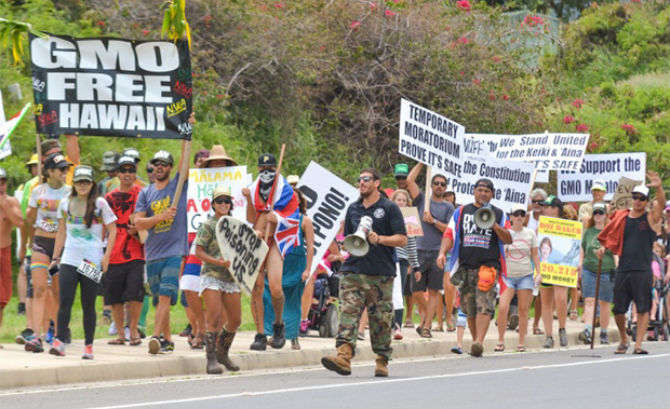 Jon Rappoport, has asked a reasonable question: Is Monsanto doing secret bio warfare research on Maui? It sounds crazy. It reads crazy. But these are crazy times, right? For what it’s worth though, we should examine the possibility as plausible; after all, Monsanto aren’t exactly leading examples with their history of deceit and bully tactics, and any Big Pharma corporation can have the same insult applied. So what if the two were working together, as Rappoport suggests, in Maui County? The Sunshine Project, an international NGO dedicated to the uncovering of prohibited biological warfare amongst other military abuses, is also active against Big Ag companies like Monsanto, and Big Pharma companies such as Dow. It was their claim back in 2007, that Monsanto may be in cahoots with the U.S. government in researching bio weaponry as a “first strike” against another country. At the time of the report, written by Sherwood Ross, several corporations were withholding information about their activities while an unprecedented sum of money ($44 billion at the time) was authorized by Congress for biological warfare research. [1]

Rappoport, a former candidate for a US Congressional seat in the 29th District of California, and investigative reporter for 30 years within the medical and political fields, has published a blog recently which questions these details in more light.

His concern is the silencing of the Maui ballot, which was intended to force Monsanto/Dow facilities into independent inspection and full disclosure of their activities in Maui County. This is where the crazy becomes legitimate. In late 2014, voters won the right to halt Monsanto’s research. [2] Within months, the vote had been overturned and refuted by the County Government, sparking claims that it has joined with Monsanto and Dow to “nullify the vote.” And it goes deeper. The case was pushed to a federal level before two judges. Judge Kurren had a conflict of interest, as she had served on the board of an environmental group involved with a $10 million donation from Dow. Ollway, the second judge delayed the matter before eventually citing that state legislation could resolve the situation (of a bill that doesn’t exist), for nullification of a vote that is easily ruled in favor or not. [3]

The end result is this: If the vote is ruled in favor, Monsanto/Dow have to explain every inch of their research under oath, with rigorous inspections conducted. For what is supposedly GMO/pesticide production, the shroud of secrecy is particularly thick, and with any good secret worth keeping, there must be high stakes.