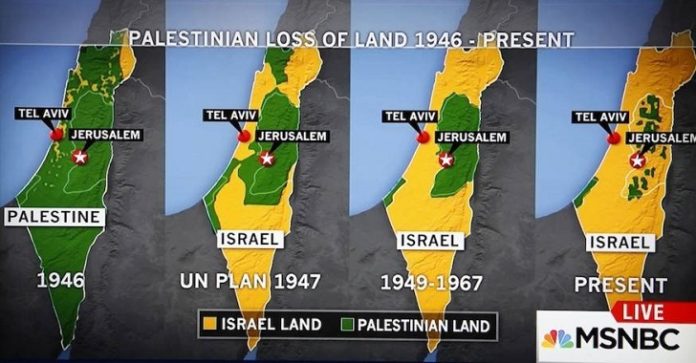 By Kit O’Connell at MINTPRESS

Before MSNBC’s apology, pro-Palestinian activists praised the segment as a rare instance of mainstream media honesty about Israeli occupation.

New York, NY — Earlier this month, MSNBC aired a well-known, but controversial graphic that illustrates how Israel has taken over Palestine as the occupation of the region has grown over time.

The graphic, which appeared during an Oct. 15 discussion between MSNBC anchor Kate Snow and Martin Fletcher, a Middle East correspondent, shows a series of four maps dating from 1946 to the present that depict the loss of Palestinian territory to Israel.

During the segment, Fletcher discussed the ways that Israel’s provocative behavior at Al-Aqsa Mosque is a major trigger for the latest violence in Gaza and the West Bank, then Snow introduced the graphic as it appeared on screen, saying: “What does that show you, Martin, that the area Palestinians are living, has it grown increasingly smaller?”

“Well, absolutely, it’s all about the land, and what this map shows you, and I must say it’s pretty shocking when you present it in this way, what it clearly shows is that, if there’s no peace agreement between the Palestinians and Israel … more of that Palestinian land will be eaten up by Jewish settlements.”

Watch Kate Snow and Martin Fletcher discuss the graphic of Palestine on MSNBC:

Supporters of Palestinian human rights on social media praised what they saw as a rare example of honesty about the occupation from TV news. But some media critics, and especially the Israeli media, criticized the segment, calling the graphic inaccurate. The Jerusalem Post referred to the image, which closely resembled a similar graphic widely circulated among activists, as “a map commonly used by Palestinian propaganda groups,” adding:

“It claimed that in 1946, present-day Israel was under Palestinian rule, leaving out the fact that it was under British Mandatory rule until May 14, 1948, when the British Mandate came to an end.

Another mistake came in the 1947 map which the graphic referred to as the ‘UN plan.’ This was inaccurate for the fact that the supposed 1947 borders never existed, since the UN’s partition plan was rejected by all Arab countries.”

On Oct. 19, MSNBC aired an apology in which Snow called the maps “not factually accurate.” Fletcher also appeared and acknowledged that although there was no internationally recognized country called “Palestine” in 1947, twice as many Arabs as Jews lived in the region at that time.

The Institute for Middle East Understanding defended the map on Thursday, arguing that it “accurately depicts the land that has been forcibly taken from Palestinians since 1946, two years before Israel was established and the accompanying expulsion of between 750,000 and a million Palestinians to make way for a Jewish state.”

And although the country of Palestine was not recognized by the British, who occupied the region in 1947, the non-profit, writing for the website Mondoweiss, noted:

“Palestine as a political entity existed prior to the formation of the state of Israel in 1948, going back to ancient times when it was a province of the Roman empire until more recently when it was British Mandatory Palestine, immediately preceding Israel’s creation.​​”

The institute also acknowledged that the map contained some factual errors, however, including incorrect labelling of the occupied Golan Heights, which Israel has claimed since the Six Day War in 1967, and that “[t]he map also shows ‘Israel’ existing in 1946. While British Mandatory Palestine did exist in 1946, there was no political entity called ‘Israel’ until 1948.”

This article (MSNBC Apologizes After Accidentally Telling the Truth About Israel) originally appeared on MintPressNews.com and was used with permission. Anti-Media Radio airs weeknights at 11pm Eastern/8pm Pacific. If you spot a typo, email [email protected].