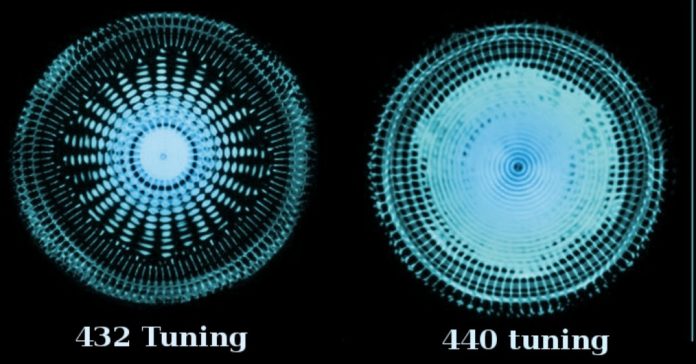 Should instruments be tuned to 440 hertz or 432 hertz? Over the last three decades, this question has been a topic of heated debate among musicians. Fueled by Nazi conspiracy theories, New Age healing methods, practical reasoning, a revived connection to ancient math and aesthetics and a spiritual connection, the 432Hz note has generated a lot of focus online.

In an attempt to determine how individuals respond to 440 hertz and 432 hertz tuning, Music scholar Maria Renold asked thousands of people worldwide to evaluate how they felt when listening to each tuning. The study was conducted over the course of 20 years.

According to her findings outlined in her book “Intervals, Scales, Tones and the Concert Pitch,” 90 percent of participants said they prefered 432Hz tuning, using words like “completed, correct, peaceful, [and] sunlike” when asked to describe how the frequency made them feel. In comparison, the participants described 440 hertz tuning as sounding “uncomfortable, oppressive, [and] narrow-minded.”

“Such a conclusion may be disconcerting and provocative,” she writes.

In addition to inciting a sense of peacefulness in listeners, the proposed switch to 432Hz is also supported by a number of practical reasons. For example, singing to this tuning is believed to put less strain on singer’s vocal cords.

So, if mounting evidence suggests that 432Hz tuning is better than the standard A=440Hz, why was it not chosen as the standard?

“In 1995, an international standard of A=440HZ was set to unify the different concert pitches previously in use,” reports the Eposh Times. The push to standardize concert pitch is said to have originated in the 1930s, after the introduction of music broadcasting, which allowed listeners from around the world to listen to live or recorded orchestra performances in concert halls.

Despite the evidence supporting these events, it is widely believed that the standardization of a=440Hz is a Nazi conspiracy to propagate aggression and stress. In his article “How the Nazis Ruined Musical Tuning,” published in the September 1988 edition of Executive Intelligence Review, Laurent Rosenfeld noted that Radio Berlin had organized the 1939 conference. Radio Berlin was used a primary propaganda tool by Joseph Goebbels.

It is said French composers were not invited to the event, due to their opposition to the 440Hz tuning. “Other sources, such as Rene Dumesnil, another advocate of lower tuning, say that this London congress was a set-up: The organizers first asked musicians, engineers, instrument makers, physicists, et cetera, whether they would agree to A=440, and whoever would not agree was simply not invited,” Rosenfeld wrote.

While the origins of the 440Hz standard are still widely debated, the effects of both frequencies have become a controversial topic. Studies have suggested 432Hz tuning can have a positive effect on water, creating visible imprints of positive energy. It has therefore been determined that 432Hz tuning can have healing effects on the human body, which is, on average, 57-60 percent water.

However, as these ideas and beliefs continue to circulate on the Internet, so does the argument against the frequency’s mystical effects and abilities. Dr Daniel Levitin, a cognitive psychologist and neuroscientist, explains in his book This Is Your Brain on Music, that the exact frequency of concert pitch is relatively unimportant when making music.

“We can fix pitches anywhere we want,” Levitin writes, “because what defines music is a set of pitch relations. The specific frequencies for notes may be arbitrary, but the distance from one frequency to the next—and hence from one note to the next in our musical system [the intervals we discussed earlier]—isn’t at all arbitrary.”

The power of 432Hz is “a hoax that’s been around a long time. Most a capella groups drift away from A440 anyway,” he continues, “and no one associates that with either demonic or heavenly qualities. The whole point of music is that the notes themselves are irrelevant to a very large degree—it is the relations among notes that give rise to music.”

When examining Renold’s study on how 432Hz and 440Hz frequencies effect emotions, he concluded that there is no evidence to suggest different tuning systems have a direct effect on emotions. Instead, Levitin theorizes expectations play a large role in music’s effects on emotions.

The uncertainty surrounding the debate about 432Hz tuning continues to fuel these conflicting views. Therefore, until further research has been conducted on the frequency and its effects on human emotions and health, the topic will likely continue to attract the attention of conspiracy theorists, music scholars and psychologists alike.

This article (Music Tuned to 432 Hertz: Nazi Conspiracy or Natural Healer? ) is a free and open source. You have permission to republish this article under a Creative Commons license with attribution to the author and AnonHQ.com.