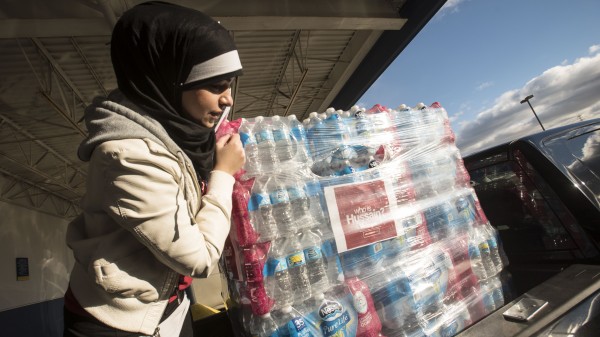 Since it emerged that the city of Flint in Michigan water has become contaminated with toxic lead chemical, the city has been facing water crisis.

Residents no longer trust the safeness of running water in the city, making potable drinking water very scarce for residents in the city.

There have been many protests in the city by residents, calling for some authorities in the city and the state to resign due to the poor nature of how they have handled, and still handling the situation. According to residents, despite the overwhelming evidence that their water has been contaminated with lead, city and state authorities continued to urge them that there was nothing wrong with it.

Flint’s water became contaminated after a change in supplier in 2014. The city switched from the Detroit water system to the Flint River. Corrosive water leached lead from old pipes into the water supply.

Residents are demanding that the state’s governor, Rick Snyder, be arrested and prosecuted for his handling of the crisis. Governor Snyder had requested $31m from the federal government.  He said the need in the city (population of almost 100,000) far exceeds the state’s capability, and sought a disaster declaration. According to the local media, President Obama denied the request because such declarations are only made for natural disasters. President Barack Obama has since declared a state of emergency in the city.

The American singer and actress, Cher announced that she would donate some 180,000 bottle of water to Flint residents to help alleviate the suffering they are going through. The water will be arriving at the Food Bank of Eastern Michigan, and it will then be distributed to low income earners in the city. It is said after resident have used the water, the empty bottles will be returned to the food bank to be recycled, with all proceeds going to charity. Before this announcement by Cher, a non-profit organization called Communities First has sent volunteers to Flint to help. The volunteers went door-to-door, delivering and installing 2,000 water filters at every affordable housing development in Flint. The volunteers also made sure that residents had the support they needed.

Apart from this help residents of Flint are getting from Communities First, other small charity organizations are also helping to solve the water situation in the city. The Michigan chapter of Who is Hussain, a Muslim group, delivered about 30,000 bottles of water to the American Red Cross on January 17 to be distributed to residents of Flint. The Washington Times reports that Who is Hussain donated the water as part of the group’s religious obligations.

Who is Hussain inspired by the story of an early Islamic leader, Imam Hussain ibn Ali, the grandson of the Islamic Prophet, Muhammad. It is said Hussain ibn Ali complained early on about growing violence and extremism in the Muslim community. But HE was brutally killed after being denied water for several days. Adherents of Hussain’s teachings therefore believe that the denial of water under any circumstances is a brutal crime. It is said the group actively promote water distribution campaigns on a regular basis.

A local filmmaker and volunteer for the group, Mohammed Almawla said “Prophet Mohammed taught us ‘Your neighbor comes before your own household.’ As a resident of Detroit this is not only a Flint problem this is a Michigan problem and I feel obligated to help to the best of my ability.” The Ahmadiyya Muslim Youth Association also delivered another 1,000 bottles to FBEM in addition to what Who is Hussain group has donated.

However, this is not the first time the Ahmadiyya Youth is doing such a thing. Last year, the group helped feed more than 180,000 people and donated more than 5,000 pints of blood across its 70 chapters in the Unites States.

This Article (Muslim Groups, Cher And Other Charities Supply Flint With Clean Drinking Water After Lead Crisis) is free and open source. You have permission to republish this article under a Creative Commons license with attribution to the author and AnonHQ.com