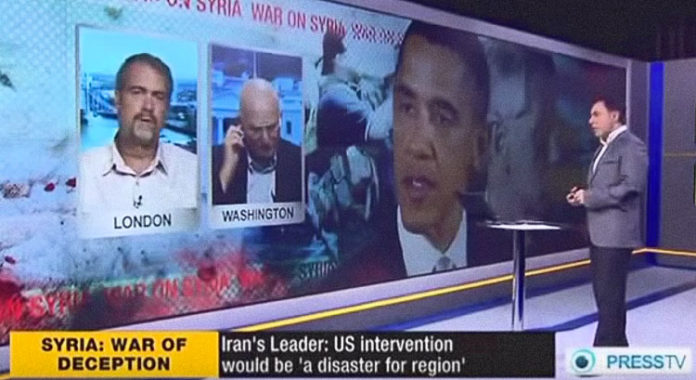 “We have tortured and killed and maimed and raped around this planet. We don’t operate under international law; we have the law of the jungle”

Ken O’ Keefe is a former US Marine turned anti-war campaigner who appeared on a Press TV debate called Syria: War of Deception, and absolutely owned his opponent in such an awesome way that you’ll be cheering at his every comment.

Recorded in August 2013, this interview is now two years old, but in light of the current European refugee crisis it’s more relevant today than ever before. Passionate, articulate and knowledgeable about the subject matter, O’Keefe is the perfect guy to step up and tell these home truths- and boy, does he do a good job. This guy nails so many crucial points about the Syria situation in one interview, he’ll have you jumping around and punching the ceiling.

“We have tortured and killed and maimed and raped around this planet; who in their right mind would consider the United States or the West in general to be in any position to punish anybody?” the veteran begins angrily, going on to outline the evidence for Syria being a false flag attack (Note: leaked emails showing how Assad was framed by the USA are detailed in this cached Daily Mail report from January 2013, which was published online briefly before being removed).

He rightly points out that the USA dropped more bombs in Vietnam than during the whole of WW2 combined, that it regularly arms terrorists (but the mainstream press refer to them as ‘freedom fighters’ when it suits them) and the former marine also points out how the so-called ‘War on Terror’ is nothing more than a well-planned strategy to be in a “perpetual state of war to destabilize the region for the Greater Israel plan.”

“We don’t operate under international law; we have the law of the jungle in which the rich and powerful basically determine what goes and what doesn’t go.” O’Keefe shouts. He correctly points out that Bush and Blair would be “rotting in prison cells” if the law were administered equally to all, or even “executed if their own rules were applied to their own crimes“. He also acknowledges that these men are nothing more than puppets who “serve rich and powerful bankers who control the money supply.”

O’Keefe rants about the hypocrisy of the West, who are arming terrorist organizations in the name of ‘freedom’ for civilians in geo-politically strategic countries while turning a blind eye to vile human rights abuses in countries like Saudi Arabia. The only people who still fall for all this crap, O’Keefe passionately points out, are “bought-off prostitutes [our politicians] or the dumbest of the dumb.”

In short, this is a video you should consider sharing with anyone you know who is still under the illusion that the USA and Britain are doing good in the world, anyone who doesn’t believe the ‘conspiracy theory’ that 9/11 (or Syria, or Libya, or Afghanistan or Iraq) were not orchestrated attacks to further a sinister long-term goal of controlling the Middle East, and anyone who believes that the desperate refugees fleeing these countries we have systematically destroyed have no right to seek help from their oppressors in Europe and North America- after all, without Western imperialism, we wouldn’t have any refugees in the first place (more on that here).

Ken O’Keefe renounced US citizenship in 2001 and now holds Irish, Hawaiian & Palestinian citizenship. He says on his blog: “My ultimate allegiance is to my entire human family and to planet Earth.”

Note, September 11th 2015: Some readers have pointed out there is no such thing as an ex-Marine. Thanks for pointing it out; this has been corrected in the text. Others have complained about the fact O’Keefe’s opponent cannot be heard. The long (20 minute) version, in which you can hear both parties have their say, can be found here.

This article (Must-Watch: Ex Marine Goes Crazy, Blows Whistle On Syrian False Flag And Real Agenda) is free and open source. You have permission to republish this article under a Creative Commons license with attribution to the author and TrueActivist.com.