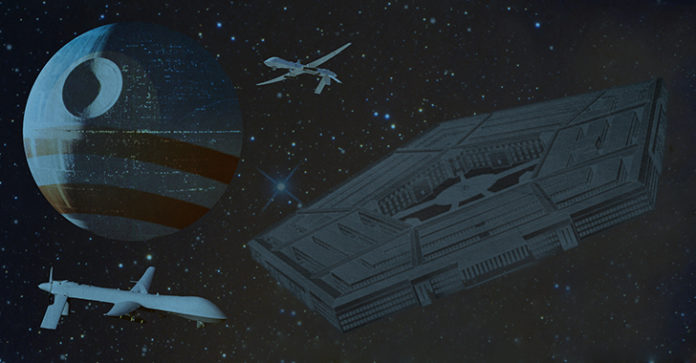 According to Defense One, the Pentagon is rushing to build a space war center to sustain its global power. Within six months, the space apparatus will be fully functional, as announced by Deputy Defense Secretary Robert Work at the 2015 GEOINT conference. Work openly admitted the move is an attempt by the Pentagon to maintain global dominance and combat alleged attacks from China and Russia.

Most prominently, the war center is intended to “track spy and military satellites at the same time so US intelligence and military can work together to create the best defense–especially against attacks on its satellite systems,” Gizmodoexplained.

Lt. Gen. Vincent Stewart, director of the Defense Intelligence Agency, alleged in January that Russia and China are “are conducting anti-satellite research and developing anti-satellite weapons, with the intent of denying the U.S. the use of space in the event of conflict.” Such threats are used to justify American expansion into space.

Due to the military’s general lust for power and proliferation, it is unsurprising that the Pentagon is seeking to further extend its tentacles into the universe. The project will operate as a backup to the Joint Space Operations Center at Vandenberg Air Force Base in California. The Joint Space Operations Center already “detects, tracks, and identifies all artificial objects in Earth orbit.” Its practices include “surveillance of space, protection of U.S. and friendly space systems, prevention of an adversary’s ability to use space systems and services for purposes hostile to U.S. national security interests, and direct support to battle management, command, control, communications, and intelligence.”

The new war center enhances these abilities but also seeks to increase surveillance on Earth. Speaking at the GEOINT conference, Work expressed excitement that the new system would allow the military an even more omniscient presence throughout the planet. By aggregating satellite images from all government departments, the war center will be able to track behavior more easily.

“We want to be able to establish patterns of life from space. We want to know what the unusual looks like,” Work said.

Evidently, in spite of having the most powerful, well-funded, and heavily armed military on Earth, the Pentagon has schizophrenically decided it needs more reach, authority, and access. This does not mean that there are no threats. It simply means the United States’ first avenue—whether initiatory or retaliatory—is almost always dominance and force.

Naturally, familiar battle cries justified the new program. Work insisted that the drive to surpass Russian and Chinese technologies is vital and that Russia poses a “clear and present danger to the United States.”

Work claimed that while space was once a “virtual sanctuary,” it must now “be considered a contested operational domain in ways that we haven’t had to think about in the past.”

Though Work attempted to paint the military’s further colonization of space as a recent and necessary development, the move mirrors American and Russian Cold War-era tactics. As both countries raced to make advancements in space, they revealed a paranoid—and ultimately militaristic—approach to exploration beyond the planet’s atmosphere, dragging relatively petty earthly conflicts into a solar system previously untainted by human vice. This is characteristic not only of America, but of any corrupt, global power seeking to establish dominance on Earth by conquering territory beyond it.

“We must be prepared now to prevail in conflicts that extend into space,” Work argued.

“The ugly reality that we must now all face is that if an adversary were able to take space away from us, our ability to project decisive power across transoceanic distances and overmatch adversaries in theaters once we get there … would be critically weakened,” Work stated at the conference, unashamed of the military’s blatant power play.

Rather than working diplomatically to solve problems between nations, the United States has once again defaulted on an aggressive, battle-oriented mentality—an all too common trait that reveals why America is the world’s biggest hegemony. By insisting on the necessity of even more tools to surveil and wage war, the military does nothing but expose its well-documented and transparent obsession with conflict, aggression, and its characteristic megalomania.

This article (The Final Frontier: US Building War Command Center to Take Foreign Policy to Space) is free and open source. You have permission to republish this article under a Creative Commons license with attribution to the author and theAntiMedia.org. Tune in! Anti-Media Radio airs Monday through Friday @ 11pm Eastern/8pm Pacific. Help us fix our typos: [email protected].