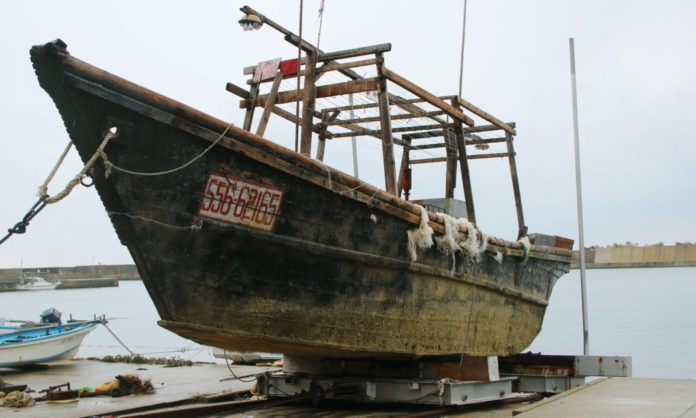 Over the last two years, more than twelve ghost boats and ships have arrived on Japanese shores with dozens of rotting bodies in them, baffling the experts by these mysterious events. However, evidence may have been discovered that points out to why this is happening.

The question on everybody’s mind is why are these ghost ships appearing? Not all of them have dead bodies onboard; some were discovered completely empty in Japan’s western sea region spanning Fukui to Hokkaido.

According to a Japanese coast guard, more than 60 such boats washed up on Japan’s shore in 2014, followed by more in 2015.

Investigators say these boats are of North Korean origin and that many of them are fishing boats.

One of the boats has been identified as a North Korean military boat. Experts found a scraped off part of the North Korean flag, indicating its origins.

Not every boat discovered held the deceased. A lot of them have been discovered completely empty. However, trying to figure out the cause of death for the bodies discovered is proving difficult for Japanese authorities, due to the extent of the decomposition. Additionally, since the number of ghost boats increases in winter, experts suggest that little food and harsh climate conditions may play a crucial role.

Even though the Japanese government prohibits North Korean ships from entering its territory, exceptions are made when emergencies occur, such as a storm.

Many investigators suggested this occurrence is a result of people trying to escape the North Korean regime.

But then again there are those who don’t agree with this theory, putting forward that if the North Koreans wanted to escape, why would they go through the trouble of travelling almost 600 miles by sea when South Korea is easier to access by land.

However, since these boats are not made for long distance travel – they’re heavy, lack standard navigation equipment, and lack the powerful engines to carry people long distances – going into unknown waters and possibly losing their bearings makes returning impossible. Also, the strong sea currents make the journey all the more arduous.

Nonetheless, the North Korean fishermen who go for a catch in such seas are aware of these facts. One report suggested wanting a bigger catch might force boats into deeper and more dangerous waters. The North Korean government permits the fisherman to keep the catch exceeding the limit required; this government technique generates more from its people, pushing them to their limits and possibly their untimely death.

This article (Mysterious Ghost Ships Full of Dead Bodies Discovered in Japanese Waters) is a free and open source. You have permission to republish this article under a Creative Commons license with attribution to the author and AnonHQ.com.