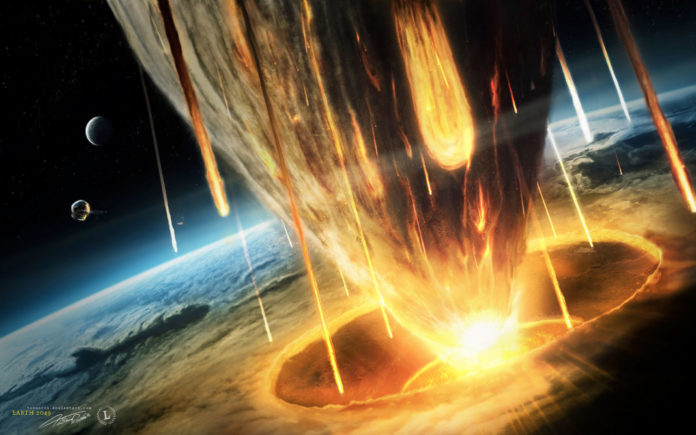 We have all probably seen the movies showing the end of the world, with some of those movies including the premise of a giant asteroid hitting Earth and destroying civilisation. In fact, there are many games that are based on the same concept as well. While playing a game, or watching a movie related to cataclysmic asteroid impacts gives us a glimpse of what is possible, the reality is completely different.

Moreover, research suggests how the dinosaurs may have come to an untimely end because of an asteroid strike; only to become ingrained in our heads that the same fate may be in store for us if an asteroid hit us today.

The main question though, is what would the reality be if we discovered a massive rock travelling through space was heading our way. Would we shoot nuclear missiles at it to divert its path or will our scientists tell us there is nothing we can do to stop it? Experts have been preparing for the worst; using computer simulations, they have discovered that the post-effects of an asteroid hitting the Earth are ultimately, pretty bad.

The Big Rock in Space

Let’s say, for instance, there is a space rock heading our way, which has a surface area of more than five miles. Upon colliding with Earth, it then opens the Earth’s crust for more than a hundred kilometres in width. Then, because of the impact, a huge amount of energy is released; maybe possibly even disintegrating the asteroid itself before the energy, in the form of a blast, spreads far and wide.

But even a rock as big as this will not turn the Earth into dust, and it will not kill all life on the planet immediately.

The experts at the National Aeronautics & Space Administration (NASA) have offered no advice for if such an event ever took place. However, NASA did say that the information would be provided beforehand – at least a few months before – so people who want to dig an underground bunker can do so.

Let’s assume that currently all technology available to us is not capable of detouring the asteroid heading our way. While the uber-wealthy orbit the Earth during impact in their NASA, Virgin and Space X pre-booked flights, those of us not near the extraction points or who can’t afford alternative ways, like going to the opposite side of the impact area on Earth or digging an underground living space, are unlikely to survive.

To some extent, the movies have portrayed this part correctly; the sky will be in its normal blue hue and will appear as though nothing is happening, albeit the tremendous amount of tension amongst people.

The asteroid will be bright but only visible to the naked eye when it’s only 24 hours away from hitting the Earth. Even at that time, you will be able to compare it with the planet Mars when it is furthest from the Sun; and if you can see the Asteroid during the day, then chances are it has already entered Earth’s atmosphere. Even when the asteroid enters the Earth’s atmosphere, the likelihood of hearing anything would be slim to none because the asteroid would tear apart the sound barrier itself.

After the asteroid has completely submerged into the Earth’s surface, the impact would resemble more than 1 billion Little Boys (Atomic bombs) or more than 50 trillion tonnes of TNT.

The location where the asteroid collides with the Earth will look like a scene from Constantine, or even worse. Within the range of a thousand kilometres of the impact zone, the Earth’s crust would have vaporised, the human eye will witness a fireball larger in appearance than the Sun itself. The heat will cause the greenery, clothes, wood, cars, tarmac to burn, and people standing outside (even some distance away) will suffer full thickness burns – unless you are near it – then you will be turned into dust. The sound of the blast, even at the other side of the world, will be like standing next to a jet flying by.

Those that made it through, and were on the other side of the impact zone, would still feel the explosion. The shockwaves would be felt under foot as far as 4000 kilometres away, and the areas that are closer will witness all infrastructure fall; roads would be damaged; massive landslides would take place; and everything resembling an after-effect of an earthquake will be witnessed.

The debris and the particles from the explosion will fly miles away from their point of origin. Moreover, Earth’s upper atmosphere is going to reach more than 1000 degrees Celsius. However, if this happens, then the hot atmosphere will also cause mass fires, and the smoke and dust covering the sky, thus, will block out the sun entirely.

After the toxic air and fires have settled – which is purely dependent on the elements that the asteroid burnt, along with Earth’s minerals – acidic rain would fall. The dust that blocked the Sun now drops the temperatures, resulting in a disruption to what is left of the Earth’s eco-system.

The acidic rain alone is going to kill many of the plants, and then naturally, the cows, goats or any other surviving animal that eats grass will die from hunger. If there are no herbivores left, naturally, the animals that eat other animals will eventually try and eat each other and die. This is the scenario that many experts believe also happened during the times of the dinosaurs.

However, with the warning of the collision coming before hand, survival might be possible, and it might not be as hard as Hollywood has portrayed it to be. There is a possibility that we might move underground or adapt to a completely new way of living. Maybe we might go underwater; hopefully, our seed banks will be intact and we might produce alternative meat products and food sources.

With that being said, currently, there is no threat from up above. Any major asteroid-related event isn’t scheduled for the diary soon. However, in case the Earth is to cross paths with an asteroid’s orbit, then the outcome is going to be different.

An asteroid as small as a house won’t destroy half a planet, but it will destroy the city or area it hits. Alternatively, an impact with a small planet or an asteroid the size of the moon will scatter Earth’s particles into the universe.

If you want to know the results of different types of asteroids hitting the Earth, along with their outcomes, we suggest you try this simulator.

This article (What Do We Do if an Asteroid Hits Earth?) is a free and open source. You have permission to republish this article under a Creative Commons license with attribution to the author and AnonHQ.com.