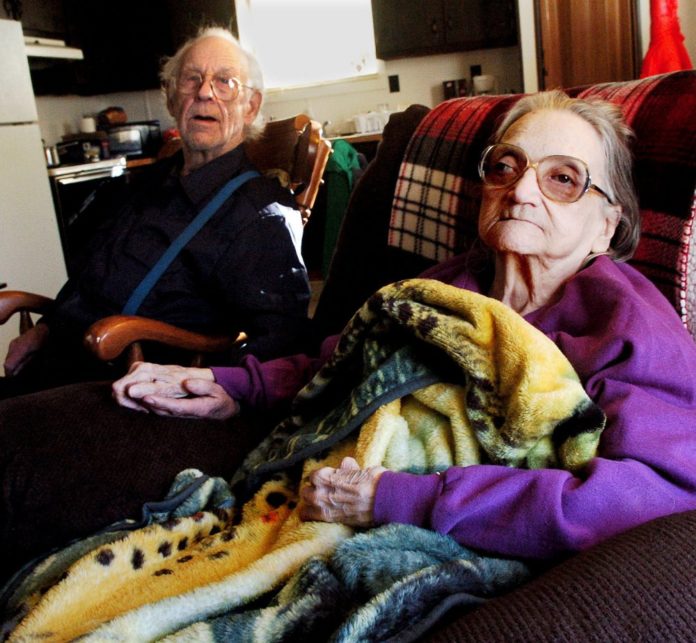 A rural community in Maine, the most northeastern U.S. state, has evicted an 80-year-old couple from their home of 33 years after they failed to pay their property tax in the amount of $4,000. The couple are suffering from early onset dementia.

According to reports, the town of Albion foreclosed on the property of National Guard and Marine Korean War veteran Richard Sukeforth and his bedridden wife, retired nurse Leonette Sukeforth in December 2015, because of nonpayment of real estate taxes. In September 2016, the couple’s home was sold for just $6,500 to Jason Marks, who threw the two 80-year-olds out on the street in the middle of a snowstorm on December 29, 2016. Sukeforth also suffers from diabetes.

Out of their own home, the elderly couple is forced to live with their daughter Yvette Ingalls in a trailer park. Son Rick and daughter-in-law Rachel house Richard’s Jack Russell terrier since the trailer park prohibits pets. In an interview with The Morning Sentinel, Richard questioned the morality of the eviction:

“That deal was very underhanded. I don’t care what anybody says. It weren’t right. They came down and evicted us when my wife was right in a hospital bed. We’re both 80 years old, so they done it and got away with it and they’re happy.”

According to The Portland Press Herald, Marks — whose father owns the property next to Richard and Leonette’s — could have allowed the couple to stay in the house if they paid the rent but he says the duo, who receive $1,252 a month in Social Security payments, refused to pay any rent:

“It’s not that I bought the property with the intentions of kicking him out and being done with it. I tried doing something along the way to help.”

Town officials, too, stand by the eviction. Albion Selectwoman Beverly Bradstreet, who owed $4,000 in property taxes for the dilapidated building and the land more accurately described as a camp, claimed:

“We paid his taxes two different years to avoid foreclosure, but then he just let it go. He knew that we were going to do it. He would come in the Town Office, but he did not pay. I don’t know why. He just waited until it was too late. We foreclosed last December. We gave him six months to still pay it off and he made no effort to pay it off. He didn’t try, and there were other people in town that could use some help, too.”

While that seems a justifiable reason for the town to act, Rachel says no one in the Sukeforth family was aware her father-in-law had failed to pay. In fact, when asked, the veteran had affirmed he’d visited the Town Office and paid the bill.

However, a notice printed in a local paper announcing the auction of the property alerted the family members, who then tried to pay the town an extortion fee for the couple’s right to live in their own home:

“As soon as we found this out, we called the Town Office. My husband and siblings and our neighbor all tried to pay the taxes up to date, and they refused payment. This wasn’t sitting well with any one of us.

“Every town has the right to refuse payment, but can also accept the payment as well. When we tried to pay selectmen, they said when an auction is posted in the newspaper, they can no longer accept payment, but that wasn’t true.”

“He’s living in poverty. Now, we’re throwing him out on the street. That’s just awful. It’s never too late until the deed transfers, and the deed had not transferred. I’m livid about it, and I think we have to have laws to protect our most vulnerable.

“I’m going to ask for an ombudsman to mediate disputes between communities and taxpayers, not just elderly. I want to change the foreclosure law as it relates to poverty, and one of the things I want to do is force them (communities) to sell property at market value and any revenues above taxes and revenue and foreclosure fees go back to the original owner.”

However, both Bradstreet and Marks question how a law would work that would prohibit municipalities from foreclosing on and evicting elderly people who do not pay taxes. While Bradstreet wonders if it would place a financial burden on towns, Marks says:

“It’s too bad it’s an elderly person, but someone not paying their taxes makes it harder for everyone who does. Everyone else pays their fair share.”

This article (Too Impoverished to Pay Taxes, 80-Year-Old Disabled Couple Kicked Out of Home) is a free and open source. You have permission to republish this article under a Creative Commons license with attribution to the author and AnonHQ.com.