The Boabeng-Fiema Monkey Sanctuary is located in the Brong Ahafo region, in the central belt of the Republic of Ghana. It is about some 400km north of the national capital, Accra.

According to a local folklore in the community, a hunter who once lived in the Boabeng community, discovered the sanctuary long ago. It is said that he came into contact with a magical spiritual being called “Daworo”, as far back as 1842. “Daworo” is an Akan language in Ghana, when translated in English it means, “the announcer”. In the course of the relationship with the mysterious “Daworo”, the hunter went to the forest one day with the spirit and saw five monkeys gathered around a pot covered with a red calico (a piece of red cloth). 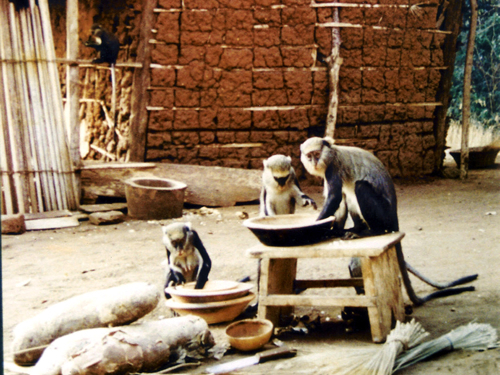 As time went by, the number of the monkeys increased and, as if paralleled, the fortunes of the hunter also significantly increased. The hunter then attributed his improved material condition to his association with the monkeys. This led to a symbiotic relationship between the monkeys, the hunter and the people who subsequently settled in the area with the permission of the hunter.

The densely tropical forest, at the heart of the two villages of Boabeng and Fiema, is home to a host of playful and friendly monkeys of all kinds. Some of the monkeys are believed to be endemic only in that forest alone. throughout Africa. 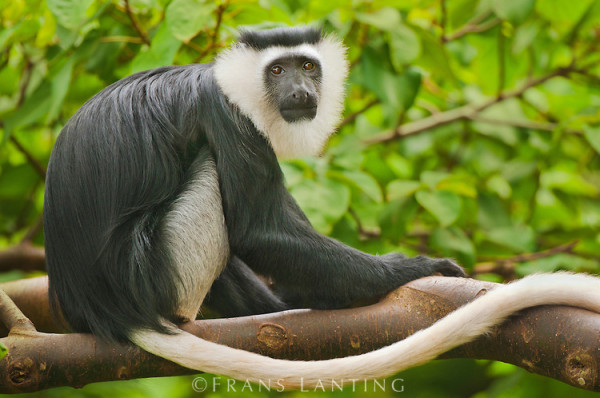 The Sanctuary is believed to be Ghana’s most famous first example of traditional African conservation in wildlife, for special species only. It is home to over 200 Geoffrey’s Pied Columbus and 500 Campbell’s Mona Monkeys.

The Sanctuary is the only place in Africa where one can easily view the monkey species in such great numbers. The monkeys come out in their numbers, probably to greet visitors whenever they realize that they have entered the forest to catch a glimpse of them.

The forest itself, which serves as a habitat for the monkeys, is made up of a canopy trees and is home to a variety of butterflies, birds, and over 90 identified species of trees.

The early hours and late evenings, are the ideal periods in the day that these monkeys can be easily spotted. It is very common to hear the monkeys shout loudly, in calling their troupe members. 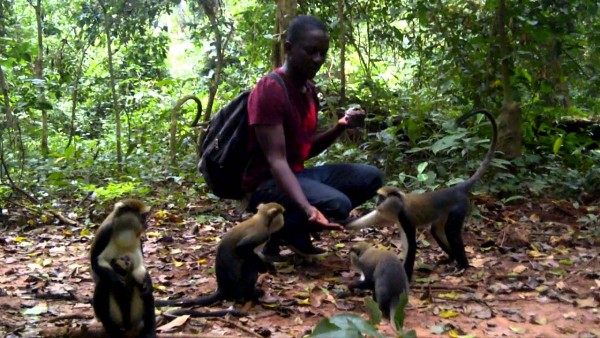 The monkeys are not harmed by the locals, because according to the traditional belief, anyone who harms them will suffer some form of calamity. It is therefore not surprising that the monkeys come so close to human beings, and sometimes, even steal food from the kitchens of the local people. This has given the monkeys some form of freedom, that is not seen in any other wildlife conservation forests in Africa. The locals revered the animals, with the belief that the monkeys are the children of the god of the twin villages of Boabeng and Fiema.

Some of the monkeys are also seen on the ground, roofs tops, jumping from house to house, and in the courtyards of homes.

Another feature of the sanctuary worth mentioning is the cemetery, where monkeys have been buried over the years. There are graves bearing inscriptions of the types of monkeys and the dates they died. Any monkey that died received funeral rites and was buried,  just like a human being. 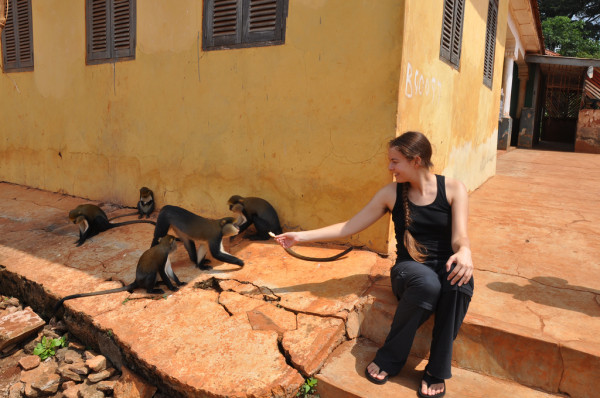 The forest that makes the sanctuary also distinguishes itself with beautiful plant species, a large percentage of which are climbers, which enable monkeys to swing and jump from tree to tree. Spanning through the sanctuary are excellent walking trails; this allows you and your tour guide to hike in the forest and observe the monkeys from all angles, either in the day or night. The monkeys are easy to see if you walk in the forest or the village, and the guides are very well-informed about the monkey clans and the areas they like to hang out. 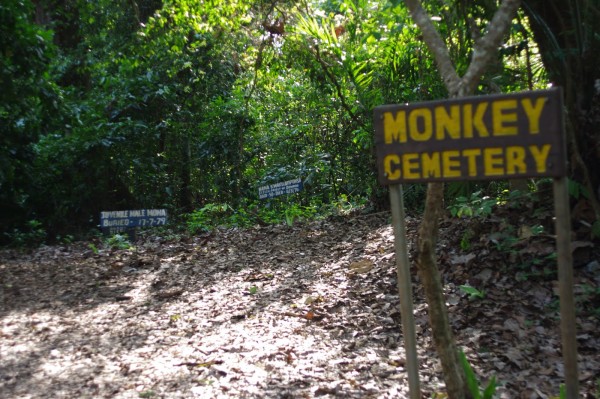 There is a small shop in the village of Boabeng, where carvings of ebony, cedar and mahogany are being sold by a local man, along with some antique traditional beads and locally made jewellery. Crafts of the different types of monkeys mentioned can also be purchased from these souvenir shops.

The people are so welcoming that all visitors to the community are treated as brothers and sisters. There are forest guides who lead visitors and tourists in tours of the two villages of Boabeng and Fiema, where you can see the monkeys interacting with the people.

There is an accommodation facility for those who wish to stay at the sanctuary overnight. Fees for the accommodation and for entry to the forest itself is quite moderate for visitors and tourists.