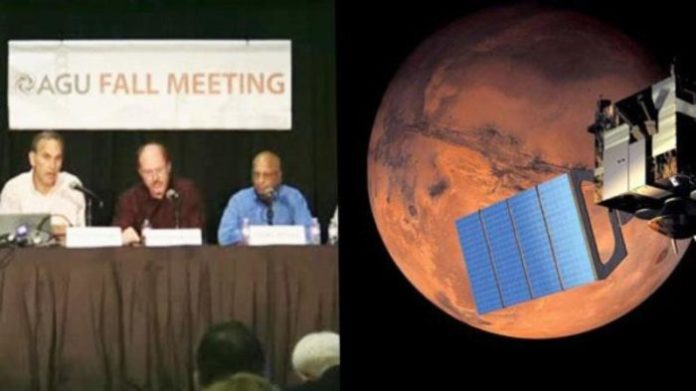 The National Aeronautics and Space Administration (NASA) is now unable to rule out possible alien life somewhere in the universe, only after it discovered methane gas on Mars in new data analyzed.

Mars is nicknamed the Red Planet. The fourth planet from the Sun, and the second-smallest planet in the Solar System, after Mercury, it is estimated to have a surface area of 44.8 million km² and a radius of 3,390 km. NASA announced that intriguing ‘burps’ of methane were recorded by the Curiosity Rover. Curiosity Rover is a car-sized robotic machine exploring Gale Crater on Mars, as part of NASA’s Mars Science Laboratory mission. According to NASA researchers, the methane gas may have been produced by bacteria on Mars. Most methane on Earth is produced as a waste gas by living organisms, but there are many non-biological processes that can also generate the gas.

The discovery has been accepted into the journal Science. The discovery came from gas samples taken by the Curiosity’s Tunable Laser Spectrometer, an instrument that uses intense light to carry out chemical analysis. In the paper, the researchers, led by Dr Chris Webster, revealed the persistence of high methane values over 60 sols (Martian days) and their sudden drop of 47 sols later,  and that the drop is not consistent with a well-mixed event, but rather with a local production or venting that, once terminated, disperses quickly. Dr Webster is from NASA’s Jet Propulsion Laboratory in Pasadena, California.

The researchers said they initially thought the gas could have come from an asteroid strike. Asteroids contain methane that can be released on impact. However, no recent strikes of asteroids have been recorded near Gale Crater, where Curiosity Rover gathered the data. The researchers made their caution known about jumping to conclusions. However, they suggested that “methanogenesis” – the formation of methane by microbial bugs known as methanogens – are likely to be behind the gas discovered. This suggestion clearly demonstrates the researchers suspicions of life on the Red Planet.

According to the Telegraph, Curiosity has previously found water that is bound in the fine soil of Mars, believed to be crucial to life. However, in this latest finding, it is likely that further study will reveal the existence of living, breathing microbes. If this happens, it will be the first official evidence of life outside our Earth.

NASA said it will conduct more readings on the data obtained from Curiosity. The readings will also allow researchers to test isotope levels, which would prove if the emissions of the gas discovered came from a biological source or not. If it is proven, then we can officially say humans are not alone in the universe. “What is interesting is that these spikes of methane are coming and going. They are transient. At the moment we can’t really tell anything, but these burps are intriguing. We have to keep an open mind. We don’t want to eliminate anything, and potentially it could indicate life or evidence of ancient methane trapped which could show ancient life. But it’s interesting to think about why it comes and goes. It seems to be suggestive of a localized source,” Dr Paul Mahaffy, a researcher at NASA, said.

Since 2012, Curiosity Rover has explored Mars’ Gale Crater, a 96-mile-wide depression believed to have been caused by an asteroid strike. It is said previous satellite observations have detected unusual plumes of methane on Mars, but none as extraordinary as the sudden “venting” measured at the crater.

Gale Crater was created when a large meteor struck the planet 3.5 billion to 3.8 billion years ago. Earlier this month, the Curiosity Rover discovered that Mount Sharp, a mound of rock in the middle of Gale Crater, was built by sediments deposited in a large lake bed tens of millions of years ago. Experts say the crater itself was once a vast ocean. In accordance to past analysis’ of rocks at the bottom of a mountain, in the middle of the crater, water flowed at different levels, over the course of millions of years. There are still substantial amounts of water ice at the poles of the planet.

Curiosity Rover reached the base of Mount Sharp in 2014. During the mission, researchers explored the mountain because its sedimentary layers provided tantalizing snapshots of the planet’s history.  Currently, the European Space Agency is preparing for their 2019 ExoMars mission to Mars. This will land a 300kg rover on the Red Planet; equipped with a two-metre drill and the ability to detect biomarkers of life.

But until this mission, only clues remain that life might exist on Mars.

This article (NASA Finally Hints at Alien Life on Mars, Finds ‘Burps’ of Methane Gas) is a free and open source. You have permission to republish this article under a Creative Commons license with attribution to the author and AnonHQ.com.