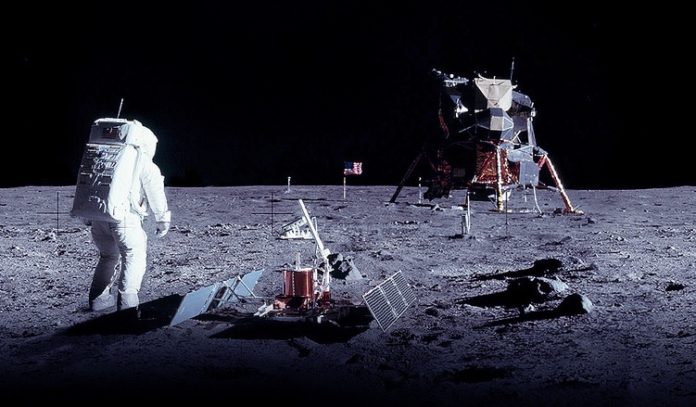 What do you know about the first Moon landing? That Apollo 11 commander Neil Armstrong became the first man to walk on the Moon on July 20, 1969? Or that the U.S. government, desperate to beat the Russians in the space race, filmed the lunar landings in a studio located either in Hollywood Hills or in Area 51?

Since the only evidence about the “giant leap for mankind” comes from NASA (National Aeronautics and Space Administration), the American space agency, you more than occasionally hear questions like: Did we really land on the Moon? How do we know the Moon landing wasn’t faked? What is the evidence that we actually went to the Moon? If we REALLY went to the Moon, how come we never went back?

In order to debunk the ‘hoax’ theories and come clean on the Moon landing, NASA recently published over 10,000 high resolution photos taken by astronauts on the surface of the Moon. Here are 10 most ‘stunning’ images that ‘prove’ the Moon Landing was real… Aldrin deploying the solar wind collector on the Moon. Image AS11-40-5872 courtesy NASA/JSC. Aldrin and Armstrong’s footprints on the Moon’s surface. Image AS11-40-5875 courtesy NASA/JSC. This crater on the Moon was photographed by the Apollo 11 astronauts during their lunar surface EVA. Dark shadows obscure much of the crater wall in the background. The object in the foreground is the Apollo 11 35mm stereo close-up camera. Image AS11-40-5954 courtesy NASA/JSC. Crater 308: This photo was taken by the Apollo 11 astronauts as they circled the far side of the Moon, which is rough with craters and marks. Image AS11-44-6611 courtesy NASA/JSC.

This article (NASA Releases 10,000+ High-Res Photos to Prove Moon Landing was Real) is a free and open source. You have permission to republish this article under a Creative Commons license with attribution to the author and AnonHQ.com.