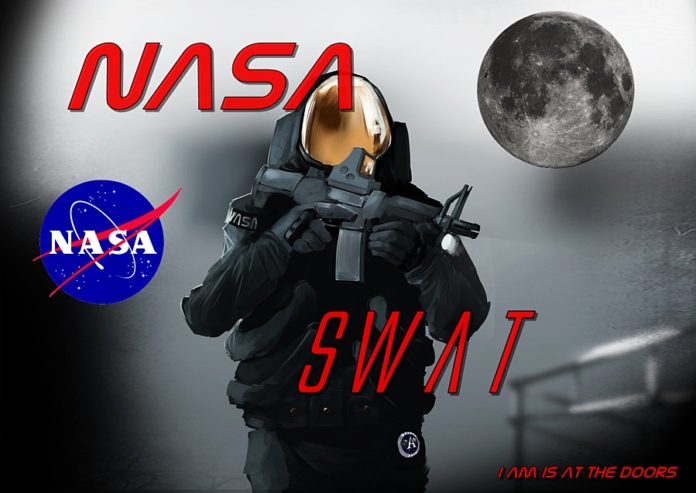 That’s right, NASA has a f*king SWAT team. Why? To steal moon rocks from elderly women of course. Joann Davis thought she was doing the right thing when she contacted NASA to see if they were interested in purchasing the moon rock that her scientist husband and former NASA employee had left her. She was experiencing financial difficulties and thought NASA would be appreciative and gladly pay her. They were appreciative all right. Enough to send a SWAT team to arrest her. Davis thought the money could help her get through hard times. She was in possession of a paperweight containing a moon rock the size of a grain of rice. She was also in possession of a piece of heat shielding from an Apollo rocket. She made arrangements to meet the potential buyer at a nearby Denny’s Restaurant. Instead of a buyer, Joann was met by a six-man SWAT team. The right thing to do would have been to confiscate the moon rock, and inform her of the legal status of making deals for rocks from space. Instead, they decided to handcuff her, detain her for hours, and refuse her the use of a bathroom.

“He kept saying, “You will be going to federal court, you will be going to federal jail.” Davis was forced to defecate on herself as the agents prohibited her from using the facilities. Davis, who was also a former NASA employee, was shocked at the way she was treated by her former employer. According to Davis’ lawyer Peter Schlueter, “In the end, Ms. Davis spent her whole life proudly working for aerospace and the government only to be jumped by NASA-organized SWAT team because someone in NASA made a mistake and wanted to get it back. And they did it in a way to humiliate her.”

Davis is suing NASA and the agent in charge, Norman Conley. The charges against her were eventually dropped, but the pain the incident caused her warrants a civil trial. The judge in her civil case agreed with Davis that her detention violated her civil rights. “[Conley] had no law enforcement interest in detaining Davis for two hours while she stood wearing urine-soaked pants in a restaurant’s parking lot during the lunch rush.” The decision paves the way for Davis to seek justice in the case, even though she will most likely never recover her property.

The biggest news here is the fact that NASA has a SWAT team. Why does NASA need a SWAT team? Well according to a post on NASA’s website: “Along with the formidable force of standard security at Kennedy, a highly trained and specialized group of guardians protect the Center from would-be troublemakers. They are the members of the Kennedy Space Center Special Weapons and Tactics (SWAT) team and they mean business.”

Typically, they are stationed around the Kennedy Space station, and there are other reports of their being used in law enforcement capers.

This article (NASA SWAT Team Raids Old Lady for Grain of Rice Sized Moon Rock) is a free and open source. You have permission to republish this article under a Creative Commons license with attribution to the author and AnonHQ.com.