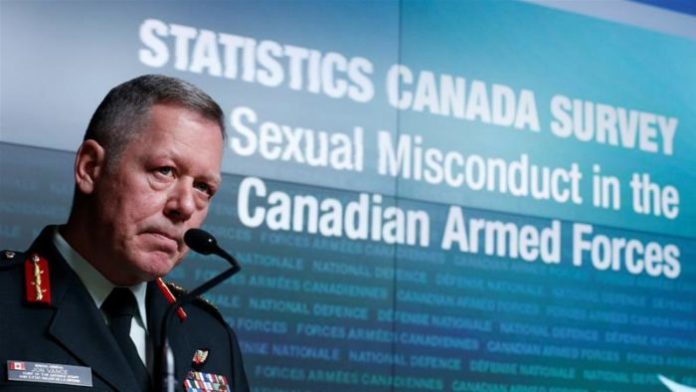 General Jonathan Vance, the Chief of the Defence Staff of the Canadian Armed Forces, has announced that an average of three Canadian soldiers were sexually assaulted or harassed each day in 2016. He said the perpetrators of these crimes are mostly superior ranking officers, while the sufferers are junior officers. When the data was collected through a survey, it confirmed the rumor. According to the data, approximately 960 soldiers admitted to being raped, grabbed, kissed, fondled, or subjected to unwanted advances after being drugged or manipulated. It is said more than half of the entire Canadian Armed Forces participated in the survey.

Although more men (570) than women (380) reported being assaulted, women were four times more likely to be victims, according to the survey. The most common form of sexual misconduct was unwanted sexual touching (840). Other forms included sexual attacks (150), and sexual activities to which the victim was unable to consent because they were drugged, intoxicated or manipulated (120). It is said only one in four victims reported their ordeal. Many of the others cited a fear of negative consequences or a lack of trust in the complaint process. General Vance said this attitude allowed the abuse to continue unabated. In fact, the survey showed endemic sexual misconduct within the senior ranks which most likely has occurred for years.

Although measures to combat the problem have been ineffective, Vance said the military would deal with the perpetrators appropriately. He revealed 30 senior officers had already been stripped of their command or supervisory role for failing to deal with the issue when they were told about the practice informally.

“I am more motivated than ever to eliminate this behavior and the perpetrators from our ranks,” General Vance was quoted as saying at a news conference, announcing the findings of the survey to the public.

Sexual misconduct in militaries around the world isn’t new. Recently, the United Nations human rights office said it has turned up six more cases of alleged sexual abuse against children by European troops in Central African Republic, including a 7-year-old girl who said she had to perform sexual acts on soldiers in exchange for water and cookies. The Central Africa Republic descended into religious conflict in 2013. The United Nations deployed troops, mostly from Europe, to help restore law and order in the country. But not long after the troops arrived in the country, sexual allegations against soldiers started to emerge.

In April 2016, a report by a United States-based advocacy group AIDS-Free World said three girls in the country told United Nations staff they were tied up and forced to have sex with a dog by a French military commander in 2014. Although the United Nations promised to thoroughly investigate and punish these soldiers, many of the soldiers have been let off the hook. Recently, a French court acquitted some of these soldiers accused to have sexually abused the vulnerable girls in the Central Africa Republic. The court ruled that there wasn’t enough evidence to convict the soldiers.

This article (Nearly 1,000 Sexual Misconducts Against Junior Ranks Reported in Canada’s Armed Forces) is a free and open source. You have permission to republish this article under a Creative Commons license with attribution to the author and AnonHQ.com.