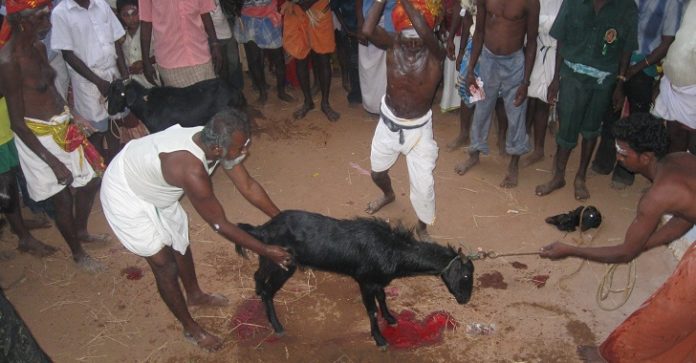 Bariyarpur, Nepal — On Monday, in an act of compassion and progress, Nepal moved to ban the largest animal sacrifice ritual in the world. The Hindu sacrifice, called the Gadhimai festival, occurs every five years to honor Gadhimai, the Hindu goddess of power. Hundreds of thousands of animals are killed in each ceremony, which has inspired animal rights activists to protest the festival in the past. The groundbreaking decision to end the ritual sacrifice was reached after lengthy negotiations between the Gadhimai Temple Trust, Animal Network Nepal, and Humane Society International/India.

Humane Society International/India explained the festival, which attracts 2.5 million Hindi visitors every year and occurs in the Nepalese town of Bariyarpur, near the Indian border:

“The Festival is held in Nepal every five years and involves the barbaric ritual sacrifice of 500,000 animals including water buffalo, sheep, pigs, rats, pigeons and chickens over a two day period. The animals are killed in front of each other, using blunt knives and swords to cut their throats.” [note: the Guardian reports that 200,000 were killed at the last festival in November of 2014 while a Guardian op-ed from December of the same year claimed it was 100,000.]

In spite of the temple’s past gruesome practices, an official statement from its committee this week said, “We, the members of the Gadhimai temple committee of Bariyarpur, Nepal, after considerable deliberations and discussions have resolved to actively abolish all future animal sacrifices at the Gadhimai temple on all occasions.”

The meat, hides, and bone of the slaughtered animals are normally sold to companies in Nepal and India, ultimately making the sacrifice comparable to what happens at many farms and slaughterhouses around the world. Even so, the epiphany for members of the temple committee that they do not need to slaughter animals to express devotion signifies an evolution in consciousness and action.

“This is a tremendous victory for compassion that will save the lives of countless animals. HSI/India was heartbroken to witness the bloodshed at Gadhimai, and we’ve worked hard to help secure this ban on future sacrifice,” said Gauri Maulekhi, an HSI/India trustee and consultant.

“We commend the temple committee but acknowledge that a huge task lies ahead of us in educating the public so that they are fully aware…Animal sacrifice is a highly regressive practice and no nation in the modern world should entertain it.”

Maulekhi previously petitioned the Indian Supreme Court to ban animal trafficking, which saw masses of animals—up to 70% of those sacrificed during the Gadhimai festival—imported into Nepal from India (among other nations, including Australia). The Supreme Court sided with the animals in October of last year, creating a measurable impact. According to HSI, the decision led to over 100 arrests and saved 2,500 animals.

While this is certainly an accomplishment, it is noteworthy that the voluntary negotiations between the Nepalese temple and non-government organizations—as opposed to the decrees of a government’s supreme court—stand to save exponentially more lives. Whereas black market animal trades could have continued to supply animals to the sacrifice, stopping the demand at the source—the temple—will have a monumental effect.

As Manoj Gautan, a founding member of AWNN and campaigner against the festival expressed, “AWNN’s progressive move to work directly with the temple committee, with Humane Society International/India’s support has been the key that changed the whole face of the campaign and is the reason for the achievement we have now.”

The power of peaceful discussion ensured not only that zero animals would be killed in future sacrifices for the festival, but that the temple that once committed the slaughter will now campaign against the practice.

“It won’t be easy to end a 400-year-old custom … but we have four years to convince people that they don’t need to sacrifice animals to please the goddess,” said Motilal Prasad, the secretary of the Gadhimai Temple Trust.

“I realised that animals are so much like us – they have the same organs as us … and feel the same pain we do.”

The committee now says it will turn away any devotees who approach the temple with an animal to sacrifice and that no bloodshed will be allowed.

This article (Nepal Just Banned the World’s Largest Animal Sacrifice) is free and open source. You have permission to republish this article under a Creative Commons license with attribution to Carey Wedler and theAntiMedia.org.