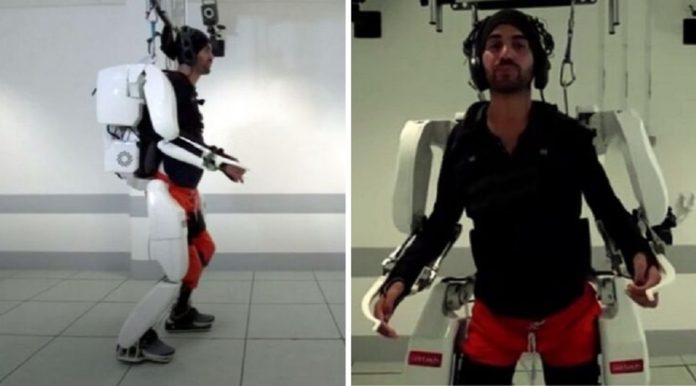 Every week there are new medical breakthroughs that display major advances in scientific technology. But only occasionally do these breakthroughs represent seismic shifts in human well-being.

We can now add to this list a new mind-reading robotic exo-skeleton that has restored movement to all four limbs of a paralyzed man.

French researchers say a 30-year-old man named Thibault (who withheld his full name) can walk (sort of) for the first time since he injured his spinal cord in a fall two years ago. The movement is thanks to a sophisticated new “robo-suit” that is essentially commanded by Thibault’s own thoughts. However, the exoskeleton still needs years of improvement before it can be used outside of a lab.

Thibault received two brain implants, each connected to 64 electrodes that read his brainwaves and transmit them to external computer software. The computer translates these brain signals into instructions for the exoskeleton, at which point Thibault can simply think “walk” in order for the suit to move forward. It’s not purely autonomous walking, but it’s a huge development for people with severe skeletal injuries.

Thibault worked with researchers to develop the technology in a series of trials at Clinatec and the University of Grenoble. The researchers used virtual reality programs to help configure the software and 65kg of cutting edge robotics for the suit.

“It was like [being the] first man on the Moon,” Thibault said. “I didn’t walk for two years. I forgot what it is to stand, I forgot I was taller than a lot of people in the room. It took a lot longer to learn how to control the arms. It was very difficult because it is a combination of multiple muscles and movements. This is the most impressive thing I do with the exoskeleton.”

In an interview for BBC, Professor Alim-Louis Benabid, the president of the Clinatec executive board, explained that the new exo-skeleton is a proof-of-concept that holds tremendous potential for “extend[ing] mobility of patients.” Benabid previously worked on deep brain stimulation for people suffering from Parkinson’s disease. “This is in [the] direction of giving better quality of life.”

Benabid says in the future, stronger computer applications and artificial intelligence will improve exoskeletons. Other scientists in the field of transhumanism worry such technology could be appropriated by governments as military weapons. Benabid says using this technology for wars would be “extreme and stupid.”