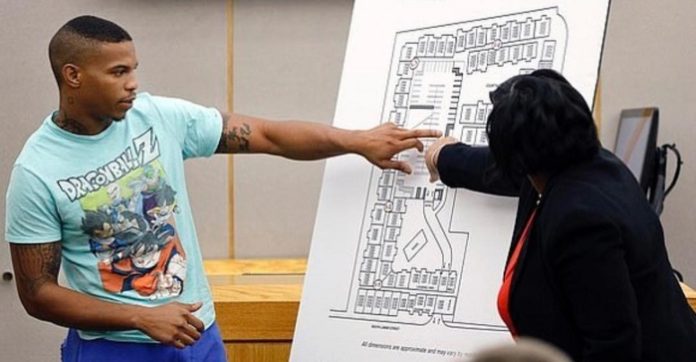 The Dallas Police Department is investigating the murder of a man who was found shot at the 4600 block of Cedar Springs Road late Friday night.

Joshua Brown the key witness in the Amber Guyger murder trial was shot and killed at his apartment complex in Dallas, Texas, just ten days after testifying.

During Brown’s testimony in court, he described Guyger’s actions after she killed Jean in his apartment.  Watch the full testimony below.

Lee Merritt, an attorney for Botham Jean’s family, broke the news, saying on social media that an assistant district attorney identified the victim to him as Joshua Brown, a man who had testified in Amber Guyger’s murder trial. Local news sources and the police did not release the name right away, but his identity has now been confirmed.

“Joshua Brown, the next door neighbor of #BothamJean was killed last night after being shot several times by an unknown assailant. Local media has reported on the shooting but have not confirmed Brown’s identity. Because, Bfown worked closely with prosecutors just a week ago to ensure Amber Guyger was properly convicted in the murder trial, the DA’s office has fairly direct contact with Brown and his family. An ADA has confirmed that it was in fact Brown who was killed although they have yet to identify a suspect or motive for the shooting. The case is now in the hands of the Dallas Police Department. Browns testimony stood out as a fact witness who was approaching his apartment directly across from Botham Jean’s apartment when shots rang out. Brown was still visibly shaken up from the incident when he took the stand to testify on behalf of the prosecution. His murder underscores the reality of the black experience in America. A former athlete turned entrepreneur – Brown lived in contsant fear that he could be the next victim of gun violence, either state sanctioned or otherwise. We have more work to do deal (sic) with the constant threats to our community both from within and without. Brown deserves the same justice he sought to ensure for the Jean family. The Dallas County criminal justice system must mobilized (sic) to identify his killer and see that he is held accountable for this murder.”

As reported by CNN, witnesses flagged down Dallas police officers around 10:30 pm and directed them to Brown’s body lying in the parking lot of the apartment complex.  The police reported that Brown had multiple gunshot wounds including in the stomach and mouth.

He was taken to Parkland Memorial Hospital where he died from his injuries. Witnesses also told police that after they heard the gunshots, they saw a silver, four-door sedan speeding out of the parking lot. There are no further details or descriptions of the suspects.