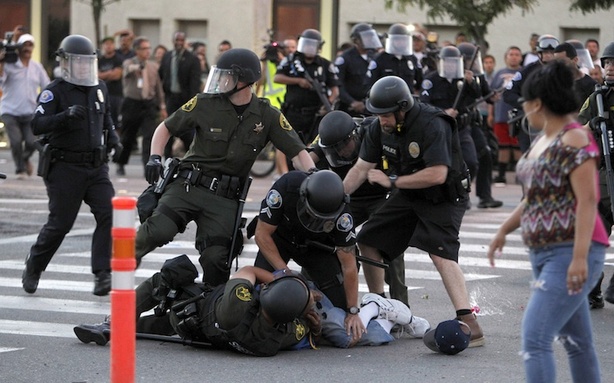 For the first time ever, a study was conducted on how many people are actually injured or killed during legal police encounters in the United States. The study was first published this week in Injury Prevention, a peer-reviewed medical journal. The study gathered data on what it defined as legal intervention as a means of injuring people.

The study was conducted by Dr Ted Miller and his team in Calverton Maryland. The study analyzed data from 2012 and made several conclusions that to some were foregone. They found that in 2012, there were 55,400 people injured by police during what were considered to be lawful stops. They also found that minorities, particularly Blacks, Hispanics and Native Americans were more likely targeted and subsequently injured or killed by police, than whites.

The study obtained its data from hospital records, which were the result of police action, as opposed to internal police records. The lead researcher Dr Ted Miller voiced his concerns, stating that police violence is “nowhere near a new problem or public health problem. Police use of excessive force without due process of law has been with us forever as a problem, and since the Civil War it’s been viewed particularly as a problem for the black community.”

The study, titled Perils of Police Action: A Cautionary Tale From US Data Sets uncovered some truly disturbing data. It found that an estimated 55,400 people were injured by police. This was determined by the coding on medical records for police involved. Statistically, the study showed that 1 in 291 police detentions resulted in a hospital treated injury. The number of minority subjects targeted by police was significantly higher than that of their white counterparts. Once detained, however, all raes were equally as likely to be injured or killed during the encounter.

According to FBI statistical information for 2012, there were only 48 felonious deaths of police officers. Police use force against suspects, in attempts to prevent death or great bodily harm to themselves or their partners. Now we know exactly how much force they are willing to use.

Police injured or killed over 55,000 people during legal stops. The statistical difference between how many police are killed by a criminal act and how many citizens they are willing to hurt, is staggering. The statistical data clearly shows that the amount of force used against the public is disproportionate to the amount of force police experience. The FBI data also states that in 2012, 52,901 officers documented having been assaulted by subjects or arrestees. This number closely matches the number of subjects that landed in the hospital, which only goes to show who the real victims are. The study only confirmed what we have already known, or at least suspected. Police in the U.S. injure more citizens during lawful encounters, than any other nation on Earth. They also like to target blacks and other minorities at staggeringly high rates, much higher than those of whites. The U.S. police system has generated criticism from around the world. It is only through studies like this that the truth can be made clear to everyone. The U.S. criminal justice system is broken and in desperate need of reform.

This article (New Study Shows U.S. Police Injured or Killed Over 55,400 People in a Single Year) is a free and open source. You have permission to republish this article under a Creative Commons license with attribution to the author and AnonHQ.com.