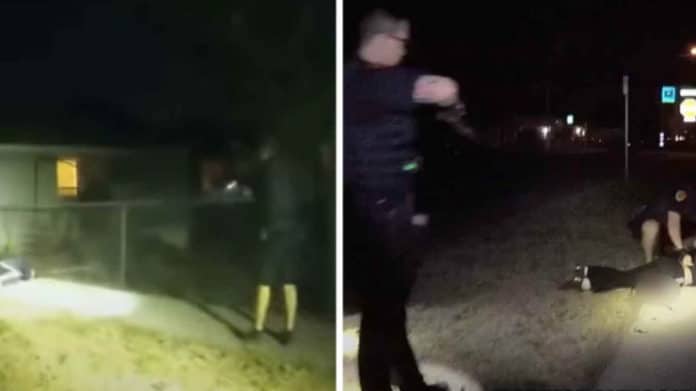 A 13-year-old named Linden Cameron, who is autistic, was shot 11 times by Salt Lake City police earlier this month, after police were called to his house.

A 13-year-old named Linden Cameron was shot 11 times by Salt Lake City police earlier this month, after police were called to his house because he was having a mental breakdown. The body camera videos of the officers involved were posted to YouTube by the Salt Lake City Police Department on Monday. The video shows that the young man was running away from a group of police when one of them opened fire on him, shooting him 11 times.

The officers were called the boy’s home by his mother, Golda Barton, who told officers that her son was on the autism spectrum. She also told them that he doesn’t like police because they killed his grandfather, and also mentioned that he may have been carrying a fake gun. This woman either lives under a rock and is totally unaware of the many fatal encounters that police have with people on the autism spectrum, or she wanted to get her son killed. She says that she called the officers to de-escalate the situation, which was obviously an incredibly naive and foolish thing to do.

One of the female officers on the scene could be heard expressing caution about the situation, and suggesting that maybe this isn’t a job that the police should be handling.

Sadly, the other officers on the scene didn’t take her advice. A few moments later, police went and knocked on the door, causing Cameron to flee through the backyard. After a short chase, Cameron was shot 11 times by one of the officers.

The video ends with Cameron saying “I don’t feel good. Tell my mom I love her,” as he is laying on the ground.

Police handcuffed him first, and then made a half-hearted effort at giving him medical attention. Luckily, Cameron was able to survive but he is still in very serious conditions and will be left with injuries that will be with him fro the rest of his life. When he was taken to the hospital, he was initially in critical condition with bullet wounds to his intestines, bladder, shoulder, and ankles. He is still in the hospital and has been having trouble speaking. He has also lost feeling in one of his arms, and doctors don’t expect him to be able to walk again.

During a press conference, SLCPD Chief Mike Brown admitted that Cameron and many other victims of police violence were not doing anything criminal.

“We are facing a mental health crisis in this country. We want to be partners with those who provide mental health services. As a community, we need to find a way forward. Too often, our officers are called to deal with these difficult problems, which frequently are not criminal in nature,” Brown said during a press conference this week.