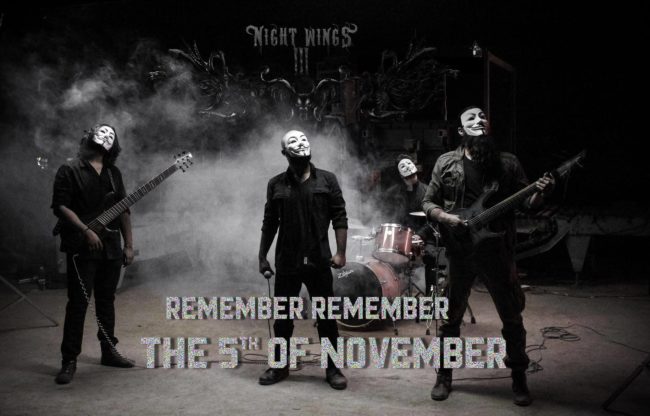 Now that the day has come and the March has been complete, the Night Wings III have released their full HD video to the public. As described by the band, the song/video “is a tribute to the hacktivist group Anonymous fighting against corruption and for a cycle of change. The video was released on November 5th on the day of Million Mask March and the video depicts the scene of November 5th where people start wearing Guy Fawkes mask and become Anonymous.”

Even if metal is ‘not your cup of tea,’ the Night Wings III deserve much respect for their work here and it is inspiring to see some of the work people all around the world are doing on behalf of Anonymous and activism in general. The group is perfect example of how we can all contribute to the movement in our own unique way and reminds us that there is no one way to protest, bring about change or have your voices be heard.

Remember remember the 5th of November

The Gun powder, treason and plot

The blatant lies, were all so clear to me now

Mate feed sleep repeat is how it was supposed to be

Now I see the shackles are these moral lies

Like a gun to the head, the debt is ur life.

We are a legion

We are the ones Unplugged

Where liberty is at risk

The need of the hour is to believe

The utopian dream is just a hoax of political lies

For you smothering cunts it’s the dawn of your time

We are a legion

We are the ones Unplugged

Where liberty is at risk

This article (Night Wings III Release Their Full Video – A Tribute To Anonymous Hackers and The MMM) is a free and open source. You have permission to republish this article using a creative commons license with attribution to the author and AnonHQ. Join the conversations at www.anonboards.com.