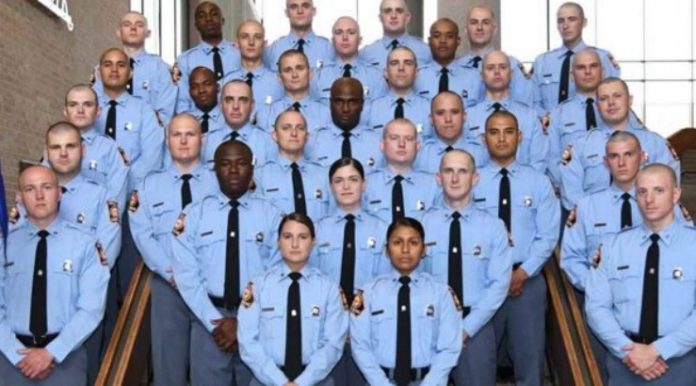 Dozens of cops in Georgia are tarnishing the badge once more after they were all fired this week. According to reports, 30 troopers with the Georgia State Patrol are now unemployed because they were found to have cheated on the test to become cops.

Hardly an “isolated incident,” Col. Mark McDonough, commissioner of the Department of Public Safety and head of GSP, said the entire class of students with the 106th trooper school is no longer after they cheated during an online test for speed detection in October of 2019.

Let that sink in. The entire class conspired to cheat on exams to become cops. Every single one of them was okay with fraudulently achieving their police status through conspiracy and cheating.

“It’s a punch in the gut,” McDonough told reporters Wednesday. “This goes to our very core values.”

According to the report, top DSP officials learned about the scandal from the girlfriend of one of the cadets, Demon Clark. The girlfriend told officials that she was the one who took the test for her cop boyfriend because he was apparently too ignorant to pass it. When officials asked Clark about the cheating, he was quick to rollover on his fellow brothers in blue, telling his superiors “he was not the only one who cheated, the whole class cheated.”

After snitching on fellow classmates, an investigation was launched and the true scope of the cheating scandal was discovered.

According to the Department of Public Safety, during the investigation each cadet described the way they cheated and helped each other with the online exam. Investigators also found that the cadets used Snapchat, group messages and Google to find and share test answers.

The actions violated the department’s code of conduct policy and the decision to fire those involved was made after the investigation concluded Wednesday morning. Thirty-two were fired; one cadet resigned. The GSP is now trying to figure out how to deal with the loss of officers.

“The impact on average can be three or four troopers per region. When you look at the size of the region, for instance, Troop I on the coast, that’s pretty much the whole coastal 100-plus miles and then inland.” McDonough said. “You take three or four troopers … off the road and you see the distance of the interstate, they’re not being there can have an impact.”

With troopers like these, however, the public is likely better served without them on the force. Nevertheless, before they were all fired, the troopers were placed in 52 assignments across the state and began carrying out their duties of extorting drivers for speeding.

According to the Atlanta-Journal Constitution, the group had written a total of 133 speeding tickets since they graduated. McDonough said that information has been supplied to courts across the state, with the expectation that most of those violations will be dismissed.

Insanely enough, this is the second time in only a few weeks TFTP has reported on an entire class of cops being fired. As we reported earlier this month, 37 future employees of the West Virginia Division of Corrections and Rehabilitation all raised their right arm in a Nazi salute and documented it with a photo. The incident, which goes far beyond just poor taste, subsequently became the subject of an investigation and multiple employees were suspended after the photo came to light. Then, in the only move that would have been acceptable, every one involved with taking the photo and posing in it has been fired. So much for the bad apple excuse.

As Georgia now struggles to replace the spots the previously filled by the corrupt troopers, they may have to turn to tactics like their neighbors in Kentucky. As TFTP previously reported, for many years, the bar was set pretty high for the state’s police force, which included the equivalent of two years of college and two years of experience as a member of the armed forces or police force. But in 2017, the KY state police announced they are taking applicants who hold a high school diploma, a GED, and three years of experience as a soldier or a cop.

This doesn’t represent a lowering of standards. New recruits will still undergo the same rigorous 24-week training regime, take the same tests and be subject to the same background check as they always have been. The difference now is that a wider variety of people can join the force.

“All we’re doing is widening the opportunity for people who maybe didn’t have the chance to go to college…We’re really opening a door for them to be able to fulfill their dream of coming on,” Loudermilk said.

Coincidentally, as the Free Thought Project has pointed out in the past, the training requirements for hairdressers are often times two or three-fold longer and more rigorous than training for police. In Kentucky, a licensed cosmetologist is required to undergo twice as much training as a state trooper.

Lowering the bar should come as no surprise given the fact that a federal court ruled police departments across the nation can discriminate against applicants who are too smart.

It takes a special kind of person to go to work every day and harass, kidnap, and kill people for victimless crimes. The act of unquestioningly carrying out orders to ruin the lives of good people whose only “crime” was to do with their own body as they wish, would eventually have to raise the eyebrow of a person with a higher level of intelligence…or so we’d like to think.

Knowing that this ability to discriminate against intelligence in police departments exists coupled with the lowering of the academic bar tends to put ‘Police State USA’ in perspective. In the past decade, we’ve seen heavily militarized actions against non-violent protesters. We’ve even seen school districts accepting MRAPs. And we’ve watched from the sidelines as Mayberry transformed to Martial Law.

If more people knew this information you could rest assured that they would try and reform their police departments. No one wants their police officers to be unintelligent, right?