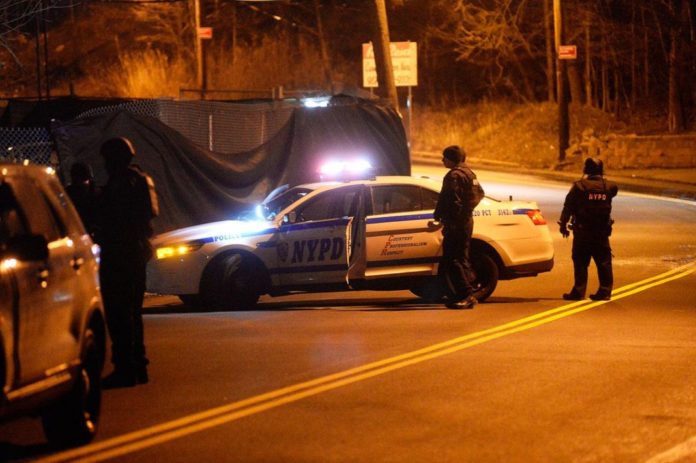 Earlier this week, the NYPD responded to shots fired near a wooded area of Staten Island. Police arrived on scene where they found two men engaged in target practice. Bearing no threat to anyone except a couple of pines, the NYPD decided to gun down the man, who they perceived as an active threat. Police recovered handguns, an AR-15, and a bullet proof vest. Police say the man pointed the handgun at them before they opened fire, however, there has been no mention of body cameras in this incident, so we just have to take their word for it.

Patrick Allen and Jonathan Derbyshire were hanging out and drinking beer when they made the horrible decision to go shoot guns in a nearby wooded area. Of course, this is against the law and they should have taken appropriate steps to go shooting. However, the response from the NYPD is laughable at best. According to Patrick Lynch, the head of NYPD’s police union, “On any call police officers respond to, they could be confronted by perps armed to the teeth with assault weapons and body armor, as they were today.” To compare a couple of drunks target shooting in the woods to the violent criminals police encounter on the streets, blatantly obfuscates the facts. Neither subject was wanted, nor were the subjects engaged in activity that could be interpreted as anything other than outright stupidity. Stupidity doesn’t warrant a death sentence — something the NYPD chose to hand down. Fortunately, neither man was killed.

“In this climate, we need the support of our elected officials and the public more than ever. NYC police officers need to be treated like professionals, paid like professionals and given the equipment and training we need to counter these increasing threats,” Lynch continued. The Daily News has even hopped on board with the police apologist headline, summing up this case: “Cops shoot armor-clad man who opened fire in Staten Island, take possible second suspect in for questioning.” The completely misleading headline does no justice to the two men who made a bad decision that day but were not out to hurt anyone. The Daily News’ twisting of reality to fit the police narrative is a perfect example of how fake news influences opinions, this time in favor of police. The Daily News article downplays the fact that the men were target shooting to instill a more sinister interpretation of the incident. “At this point, we’re not sure if (Allen) fired at us or not, but he did point the gun at us.” Allen was hit by bullets from two officers’ guns and was hit in the leg, arm and bulletproof vest. The very vest that police have criticized the public for owning is what saved this man’s life from the police. No wonder they don’t want the public owning them. Allen is recovering in a Staten Island hospital and Derbyshire was found and taken into custody a mile from the shooting. Neighbors don’t believe the police story. According to Renee Schwenke, Derbyshire’s former landlord, “I’m flabbergasted. My father grew up with his father and they are good people and work hard and come from very strong family. His father is well respected. This seems not plausible at all.” Without any video or witnesses, the police are simply not to be believed that Allen pointed the firearm at them.

This article (NYPD Gun Down Man for Target Shooting in Staten Island Woods) is a free and open source. You have permission to republish this article under a Creative Commons license with attribution to the author and AnonHQ.com.