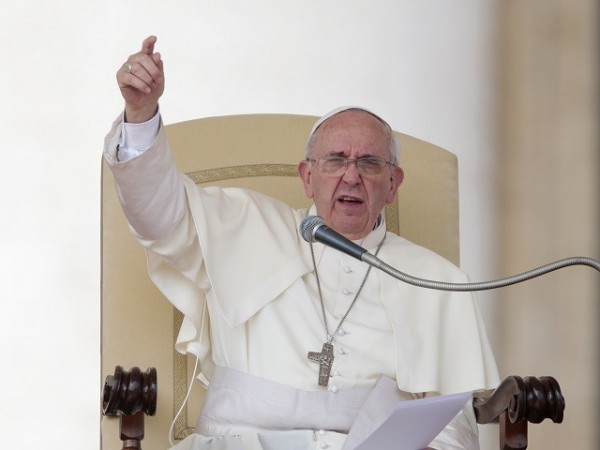 The leader of the Roman Catholic Church, Pope Francis has sounded a strong warning to the various organized criminal gangs known as mafia in Italy that they have place in the church.

The pontiff said God has rejected the mafia and that they will surely burn in hell fire in the hereafter if they did not change and seek salvation from God.

The RT News quoted him as saying that the mafias “are excommunicated from God and the Catholic Church” and that they are “adoration of evil and contempt of the common good.” The 266th leader of the Catholic Church said the Vatican would apply all efforts to combat the activities of the mafias in the church in order not to allow the evil practice of the group tarnish the image of the church.

“Those who in their lives follow this path of evil, as Mafiosi do, are not in communion with God. They are excommunicated. This evil must be fought against, it must be pushed aside. We must say no to it. Repent! There is no time to avoid ending up in hell, which is what awaits you if you do not change course”, he said.

Pope Francis also promised his commitment to continue releasing the annual financial report of the bank of the church to the public in order to create more financial transparency of the church.

According to historians, the roots of Italian organized crime date back to the 1500s. Italian media say there are five main known mafia-style organizations in Italy currently. The Cosa Nostra of Sicily, Ndrangheta of Calabria, Camorra of Naples and a relative new small Stidda and Sacra Corona Unita of Puglia. In the past, diplomats and social commentators have accused the church and the Italian government of being complicit in the activities of the mafias, making them powerful organizations difficult to fight.

The Ndrangheta of Calabria is said to be the leading mafia group in Italy and also the most recognizable worldwide. It is believed the group has influence in Latin American countries, helping it to dominate the global cocaine trade.

They are centered in Calabria with affiliates in many countries. The group is said to have became the most powerful syndicate of Italy in the late 1990s and early 2000s. Their activities include drug trafficking, extortion and money laundering. Economists have said the organization accounts to at least 3 percent of Italy’s GDP, with a total revenue of 53 billion Euros annually.

“If it were not part of Italy, Calabria would be a failed state. The ‘Ndrangheta organized crime syndicate controls vast portions of its territory and economy, and accounts for at least three percent of Italy’s GDP through drug trafficking, extortion and usury,” US Consul General in Naples, Patrick Truhn said previously in a confidential report revealed by WikiLeaks. A prosecutor tracing the Ndrangheta’s international links, Nicola Gratteri has also said in the past that some 80 percent of cocaine in Europe is smuggled by Ndrangheta, adding that “Altogether in the world, I would say it has maybe 10,000 members”.

In 2012, it emerged that some top officials of the mafias in Italy have been engaging in money laundering at the Vatican Bank known as the Institute for Religious Works.

Following the disclosure, Pope Francis’ predecessor Benedict appointed a five-person papal commission to investigate the activities of the bank just before he resigned.

This Article (Official: Pope Francis Excommunicates Italian Mafia From The Catholic Church) is free and open source. You have permission to republish this article under a Creative Commons license with attribution to the author and AnonHQ.com.