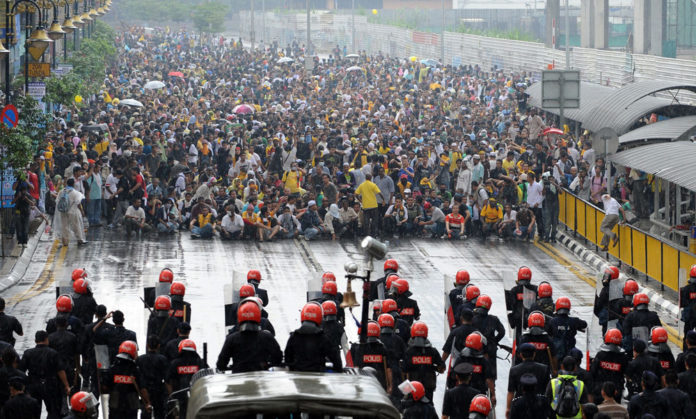 Goldman Sachs, quite contrary to its name, seems to turn everything it touches brown and smelly rather than yellow and shiny. Take the recent 1MDB scandal that is rocking Malaysia, sparking massive protests in the capital.

A textbook case of probable corruption, we have the prime minister setting up an investment fund which claims to be aimed at the lofty but extremely vague goal of developing Malaysia into a “high-income economy” (judging by the crashing currency, perhaps that goal was not successful);

The evil banker that takes in millions of fees and overcharges the all-too-willing-to-pay investment fund which soon begins bleeding money, missing payments to creditors and suddenly 11 BILLION bucks of debt to pay; the prime minister receiving 700 MILLION USD in bribes- I mean stolen loot- I mean an extremely large “donation” from an unspecified (and possibly non-existent/ intermediary) Saudi Arabian middle-eastern something something something;

The fact that he fired his deputy PM for criticizing him over the debacle, the attorney general who was heading the investigation against him and four other cabinet members;

The demonizing of the protesters, calling protests “illegal” and even “haram”. Blaming the people, whom this PM claims to serve: “Those who wear this yellow attire… want to discredit our good name, scribble black coal on Malaysia’s face to the outside world,” national news agency Bernama quoted Mr Najib as saying;

The crushing of dissent via deployment of shield-banging well-armoured riot police, rather than addressing the protesters’ concerns by opening up the books;

Now the police is looking to speak with the organizers of these “haram” yet exceedingly peaceful protests.

Yup. Textbook.
You see, corruptly stealing money from the people is EASY when we’re in the boom times… but as economies begin to slow down for the upcoming recession (let’s face it, there was never a real recovery, it was only ever a wealth-transfer to the rich- in Malaysia’s case in particular, as well as most other nations as well as the USA) these little inconsistencies tend to show up…

To be fair though, Najib was elected in a democratic election (haha, elections are SO fun when the people are fooled into believing choosing a piece of sh** over a pile of donkey cra* is a legitimate choice) and what his opponents are suggesting would violate that. He could be impeached though, and well he should be if he cannot come up with a good reason for receiving that obscene amount of moolah… which has now disappeared, probably to some Swiss/Cayman bank account.

The protests have been massive, with an estimated 200,000 taking part according to Bersih, the group that had organised them… and 25,000 according to the police and most of the mainstream media.

This Article (Thousands Protest Corruption In Malaysia: A Summary of What Has Happened So Far) is free and open source. You have permission to republish this article under a Creative Commons license with attribution to the author and AnonHQ.com.