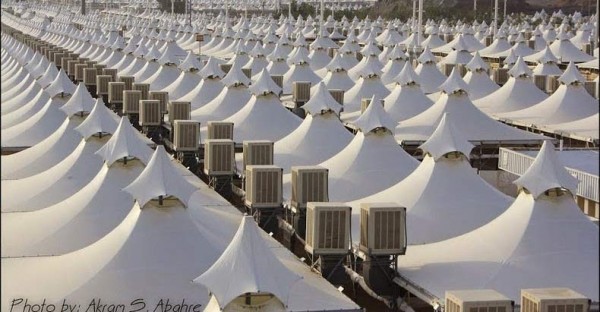 People fleeing from conflict zones in the Middle East to Europe have surged to an unprecedented level, leaving many European nations confused about how to create a reasonable solution to deal with the influx.

This influx is largely due to the increase in violence in Middle Eastern countries especially in Syria where fighting between government troops and many rebel factions over the past four years have devastated the civilian population.

Most refugees who escape to neighboring countries, including Jordan and Lebanon are left in very miserable conditions. Circumstances are insufficient for accommodating them and hence some have no alternative but to risk their lives on the high Mediterranean Sea to reach Europe. But in a latest revelation by the Free Thought Project, more than 100,000 empty air conditioned tents which can accommodate over 3 Million have been discovered in the Kingdom of Saudi Arabia almost unoccupied.

And the sad story is that Saudi Arabia together with some western countries are the forces fuelling this refugee crisis. The Amusing Planet reports that the sprawling networks of high quality tents are located in the city of Mina, spreading across a 20 square km valley. The tents are only used for 5 days of the year by Hajj pilgrims who are in Saudi Arabia for their religious duty. The tents are said to measure 8 meters by 8 meters. The tents were permanently constructed by the Saudi government in the 1990’s and upgraded again in 1997 to be fire proof. They are divided into camps which include kitchen and bathroom facilities.

By critical estimation, the tents are said to have capacity to provide shelter for almost all of the 4 million Syrian refugees that have been displaced by the civil war. A war in which Saudi Arabia has been actively funding and arming jihadist groups. Due to the increasing criticisms of the dullness of the Saudi government in the refugee crisis, the government said it has taken 500,000 Syrians since 2011. However, the Washington Post has disputed this claim. The paper said Gulf Arab nations like Saudi Arabia, Qatar, Kuwait and others have taken in precisely zero Syrian refugees. Many other rights groups have also said the figure given by the Saudi government is false. It is said many Syrians legally migrated to Saudi Arabia to work even before the war. And the Saudi government is using them to create a window to escape blame. Meanwhile, as Saudi Arabia has shamefully failed to honor its moral obligations towards the refugees, it has ridiculously offered to build up to 200 mosques for the 500,000 migrants a year expected to pour into Germany. This is how low Saudi Arabia has lowered the crisis. It has surrendered common sense and its religious duty to share greed and vanity.

No wonder a reckless act by the country’s authorities led to the collapsing of a crane in the centre of the Grand Mosque of Mecca, killing more than 100 pilgrimages. Some images posted on social media showed lightning strike moment before the crane collapsed. The Amusing Planet states in plain language that “For the rest of the year, Mina remains pretty much deserted.” This means the tents will have no use. Meanwhile, people are struggling somewhere to have just a place to put their heads down. The likelihood of the Saudis inviting Syrian refugees to stay in Mina is virtually zero. The thousands of empty tents serve as a physical representation of the hypocrisy shared by wealthy Gulf Arab states when it comes to helping with the crisis. They are a complete disgrace to humanity.

This Article (Shocking: Saudi Arabia Has Over 100,000 Empty Air Conditioned Tents For Over 3 Million But Has Refused To Take Refugees [Images]) is free and open source. You have permission to republish this article under a Creative Commons license with attribution to the author and AnonHQ.com.