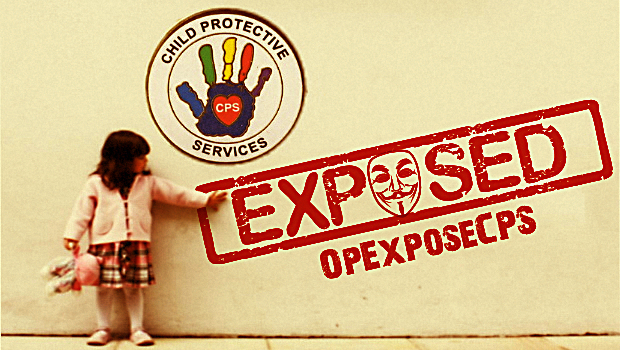 Anonymous activists have announced a global campaign to expose the corruption and rampant child abuse plaguing the Child Protective Services. The first phase of Operation Expose CPS is to force FBI to investigate the CPS-DHS system, which has become a profit center, as a whole; bring the criminals to justice; act against the legal kidnapping and trafficking of children for profit, and stop the unjustified terror campaign against American parents and their children.

The group warns, “If the FBI refuses to perform an open investigation on CPS-DHS, we will brand not only the FBI but other agencies, which refuse to investigate such as the DoJ and AG offices, as supporters of the child trafficking ring and they can sink on the ship of child abuse together. We have all sat by for far too long waiting for something to be done. If our demands are not met we will take down the entire CPS organization piece by piece. Your days of child abuse and profiteering from children’s misery are coming to an end CPS. Child Protection Services, we will never forgive the horrors you have committed against these children just as they will never forget their treatment at your hand. You should have expected us.”

In the video announcement the activists also demand an investigation into Georgia State Senator Nancy Schaefer’s murder in 2010 after she produced volumes of evidence against CPS to the US Justice Department and the International Criminal Court.

“We also demand a full, open investigation into the murder of Nancy Schaefer. We know this was in no way a murder-suicide. Nancy was murdered because she got too close and because she was taking children away from the CPS. Not only was Nancy helping tons of families, but she was clearly onto something very big for CPS to have murdered her. Justice will be served for this woman,” the group warns.

CPS, DHS, welfare officers and other child safety departments are accused of stealing children on some or the other pretext, taking the wrong children, giving their custody to foster parents with a criminal history who eventually kill or sexually abuse the innocent kids, and forcefully kidnapping the children from caring parents who end up in costly legal battles to get them back.

The Operation Expose CPS has evolved into an organized effort with a first round of calls/faxes/emails sent to the FBI on March 21. The second and third rounds of protest were carried out in April and May. A final international day of protest against America’s department of Child Protective Services is scheduled on June 5. You can visit the campaign’s Facebook page for updated announcements.