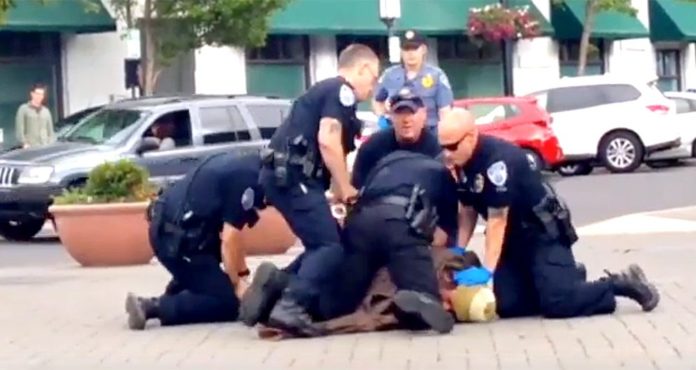 A homeless man, known as Redwood, was captured on video being beaten and violently handcuffed by Ashland Oregon Police. The video starts with Redwood standing twenty feet or more from officers, yelling federal law, attempting to educate the officers harassing him. Redwood was defending the service dog of another homeless man, who was being harassed by police. Within minutes, a large group of officers walks over to him and the onslaught from these Oregon police officers begins.

Redwood can be heard telling the officers that they are violating the American’s With Disabilities Act and that his friend’s dog is actually a service dog. Service dogs are exempt from laws banning dogs in certain areas or public establishments.

The police did what police do when you challenge them and bruise their ego with facts – they arrested him. Redwood is a large man suffering from Autism. When they attempted to handcuff him, he told them he can’t relax his muscles. The police instead of stopping and figuring out what was happening, proceeded to drag Redwood to the ground where he continues to scream.

“It hurts” he yelled. “I’m Autistic, I can’t relax my muscles,” he continued to relay crucial information to the police, who did not seem to care about his explanations.

According to Human Rights Oregon, a human rights group, they stated that Redwood suffers from Asperger’s Syndrome, a variation of Autism. They advised that muscle clenching is a side effect of Autism when the subject is exposed to stress. “He is a peaceful person who describes himself on a spiritual journey, and is constantly helping other people out.”

This made no difference to the police who pick on the homeless. The homeless are easy ways for police to get stats. With no money or family, they usually do not have the resources to wage a legal campaign; typically getting caught up in the vicious cycle of the justice system, simply for not having a home. Redwood’s friend with the dog seemingly disappeared after the cops attention was turned. He was later arrested for felony escape for using a nearby port-a-potty.

The City of Ashland has been criticized by the ACLU for having overly harsh punishments for prohibited camping. This ordinance fundamentally makes it illegal to be homeless in their city.

“The poor should not be punished simply for being poor, and that’s what this law does in Ashland,” David Fidanque, the Oregon Director of the ACLU stated. “The city of Ashland – and all the cities – should seek to address the underlying issues of homelessness and poverty, rather then enacting and enforcing laws that target those who are homeless.”

According to Police Chief Tighe O’Meara, his officers did nothing wrong. He further advised that no official complaint has yet been made about this incident. Another fundamental problem with police is yet exposed, when a chief watches the same video that caused outrage nationwide, and still believes that nothing is wrong.

Police see the world through glasses of their own agenda. Common sense and practicality have never been part of the police officer’s motto.

Sources: Photography Is Not A Crime.

This article (Oregon Cops Beat Autistic Homeless Man as He Attempts to Teach Them the Law) is a free and open source. You have permission to republish this article under a Creative Commons license with attribution to the author and AnonHQ.com.