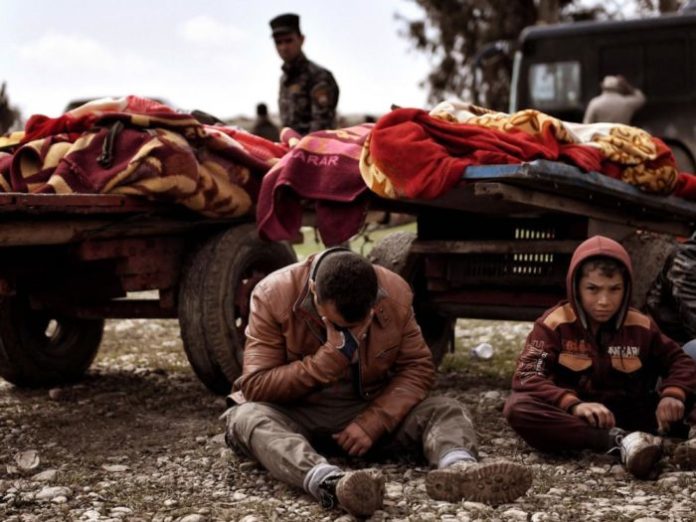 In the past few weeks, the Western mainstream media has been dominated by Donald Trump’s empty threats on the Democratic People’s Republic of Korea.

Trump sent the whole world ducking for cover when he announced his orders to deploy four warships to the Korean Peninsula to deal with nuclear-armed North Korea. Of course, only a fool would dare attempt to attack a country like North Korea, which is armed to the teeth with nuclear weapons. The consequences of such an attack would have been very easily devastating for the entire world. It later emerged that the warships didn’t head to Korea as Trump had claimed. It went to take part in military exercises with the Australian Navy on the Indian Ocean. This however didn’t stop the media from stoking the war flames. The reports were as if the war has already begun.

But as the media was busy covering Trump’s comments on North Korea, back at the U.S. defense headquarters, the Pentagon quietly released a report admitting that its airstrikes in Syria and Iraq have killed 352 civilians since the air campaign began against ISIS in 2014.

Need we not tell you that this Pentagon report is highly ludicrous. If you have been following our reports closely, you will immediately realize the Pentagon has put the death toll far lower in order to not dent the image of the U.S. military.

The Pentagon claims that the figure is a count of all civilians’ deaths since the U.S. formed the air coalition against ISIS. We are treating this Pentagon report with the highest form of contempt it deserves. We know it is not true that the U.S-led airstrikes have caused this low number of civilian fatalities. Over the past few weeks, human rights campaigners monitoring the situation in Syria and Iraq have been sounding the alarm bell that civilian casualties from the U.S-led airstrikes is very much on the rise in both nations.

In the Iraqi city of Mosul, the U.S. is leading a bloody battle campaign to retake the city from ISIS. Although the U.S. doesn’t have ground troops in Mosul, it is backing Iraqi ground troops with airstrikes. According to human rights campaigners monitoring the siege on the city, these U.S-led airstrikes are causing mass killings and civilian casualties.

On March 17, airstrikes by the U.S. left over 200 civilians dead in just a single day. Even the Iraqi Vice President said after this attack that the U.S. is using extreme force on the city without priority given to the lives of civilians.

Although the Pentagon said it would investigate the March airstrike, the issue has since died a natural death. The media is uninterested — simply because the U.S. is committing the killings. In this latest report released by the Pentagon, it failed to mention the May 17 murders of the Mosul civilians, which the U.S. military carried out. Of course, this means that the report was cooked in Arlington County where the Pentagon is based, thus deceiving the public in attempts to win more support.

The media is aiding the Pentagon with the obfuscation of facts. With the help of the Western press becoming a presstitute — puppets of the U.S. government — the Pentagon finds it very easy to spew out lies without any challenge from the Fourth Estate. What is supposed to serve as a watchdog against the government for citizens, the mainstream media rarely exposes the bare truth to those who seek it.

Currently, the situation on the ground in Mosul is appalling. There is a large-scale humanitarian crisis in the city and its surrounding areas. The slaughtering of innocent civilians by U.S. airstrikes continues every day.

The London-based conflict monitoring group Airwars has said that more than 3,000 civilians have been killed by U.S-led airstrikes in both Syria and Iraq since the air operation began against ISIS in 2014.

Of a particular concern to Airwars, is Mosul. The London-based organization said it is shocked about the Western media’s failure to report on the humanitarian crisis in Mosul that has been caused by U.S. airstrikes.

“We’re seeing worse numbers now in Mosul than we did during Aleppo. We didn’t see that level of death in Aleppo, yet we did during, the final stages of Aleppo – in fact all through the Aleppo siege – we saw significant international media coverage. So why is there this difference? Why does [the] international media not want to engage on civilian casualties in Mosul?” Woods asked.

Mosul is the second biggest city in Iraq. The U.S-led airstrikes in the city have left residents without food, water, and electricity. According to the International Organization for Migration, more than 200,000 residents have fled the city since the siege began in October last year.

This article (Pentagon Shamefully Admits Slaughtering 352 Civilians as it Lies About Real Death Toll) is a free and open source. You have permission to republish this article under a Creative Commons license with attribution to the author and AnonHQ.com.