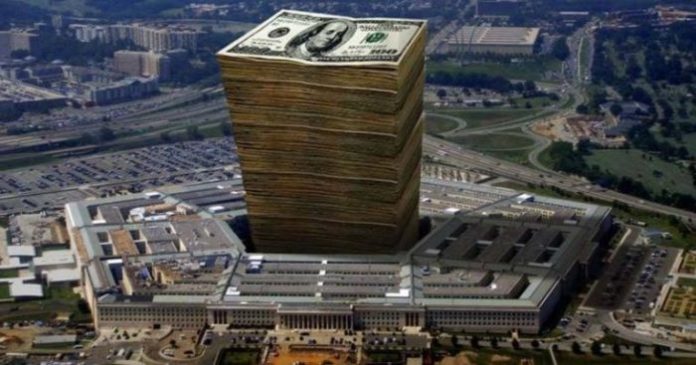 The United States Department of Defense is the world’s largest employer. It employs approximately 3.2 million people. At the heart of the department is the Pentagon, which serves as its headquarters.

For some time now, the Pentagon has been embroiled in a series of money wasting sprees. In 2016, we reported extensively on some of these financial malfeasances going on at the Pentagon. For example, in September 2016, it emerged that Pentagon officials used taxpayers’ money to gamble and visit strip clubs. In that same month, Pentagon officials admitted to wasting money on useless defense spending, which if stopped, could save the country some $2 billion annually. Then in October, we had breaking news that the Pentagon has been caught paying a PR firm $540 million to make fake terrorist videos. All these point to the systemic endemic corruption, and to the deliberate waste of taxpayers’ money at the Pentagon.

An internal study conducted by the Pentagon has revealed a whopping amount of $125 billion is being wasted in administrative and business operations by officials in charge of the Pentagon. After the study was conducted and top officials of the Pentagon became aware of the findings, they made a decision to hide the study from Congress and the public.

However, the study was leaked to The Washington Post by anonymous employees of the Pentagon, who have become frustrated regarding the operation of the quarters. The Post also obtained some confidential memos from the Pentagon confirming the leaked study. In 2016, the United States spent $585.3 billion on defense. In fact, this money is more than the defense spending of China, Saudi Arabia, Russia, United Kingdom, India, France and Japan combined.

The Post said Pentagon officials kept the report from the public because it feared that Congress would use the findings in the damning report as an excuse to slash the defense budget.

According to The Post, Pentagon leaders had requested the study to help make their enormous back-office bureaucracy more efficient, enabling them to also reinvest any savings into combat power. But after the study documented far more wasteful spending than expected, senior defense officials, including those who commissioned the study, moved quickly to discredit and suppress the results.

According to the details, Deputy Defense Secretary Robert Work ordered the study to be conducted, with firm support from the then Defense Secretary Chuck Hagel, in 2014. At the beginning of the study Work said he is was determined to eliminate the Pentagon’s excess spending.

But after the findings of the study were presented, he quickly changed his position, saying the study was not reliable. His boss, Hagel, was kicked out of office by the then president, Barack Obama. Hagel was then replaced with Ash Carter.

The study’s report was issued in January 2015. It provided “a clear path” for the Defense Department to save $125 billion over five years. The plan didn’t require layoffs of civil servants or reductions in military personnel. Instead, it streamlined the bureaucracy through attrition and early retirements, curtailed high-priced contractors and made better use of information technology. For example, the Army employed 199,661 full-time contractors. That alone exceeded the combined civil workforce for the Departments of State, Agriculture, Commerce, Education, Energy, and Housing and Urban Development, according to The Post analysis.

The report also revealed that it was the first time that the Pentagon was spending almost a quarter of its defense budget on overheads and core business operations, such as accounting, human resources, logistics and property management. It is said the $125 billion being wasted on this needless personnel and others could be redirected to boost combat power. The money could also cover the operational costs for 50 Army brigades or 3,000 F-35 Joint Strike Fighters for the Air Force, or 10 aircraft-carrier strike groups for the Navy.

The problem of this endemic waste of scarce taxpayers’ money is believed to have the backing of the White House. According to former officials of the Pentagon, former defense secretaries, including William S. Cohen and Robert M. Gates, launched similar efficiency drives in 1997 and 2010 respectively, to cut down excess spending, but each was replaced as soon as they began their initiatives, allowing their efforts to go down the drain.

“Because we turn over our secretaries and deputy secretaries so often, the bureaucracy just waits things out. You can’t do it at the tail end of an administration. It’s not going to work. Either you leave the starting block with a very clear program, or you’re not going to get it done”, said Dov Zakheim, who served as Pentagon comptroller under President George W. Bush.

The question is, why would any Defense Secretary who tries to ensure spending discipline at the Pentagon be quickly replaced? It is a conspiracy between the political actors in Capitol Hill. That is how the Pentagon wastes the American taxpayers’ dollar – living the American dream on the citizens’ behalf.

This article (Pentagon Wastes $125 Billion of Taxpayers’ Money on Defense Contractors and Others, Buries Evidence) is a free and open source. You have permission to republish this article under a Creative Commons license with attribution to the author and AnonHQ.com.