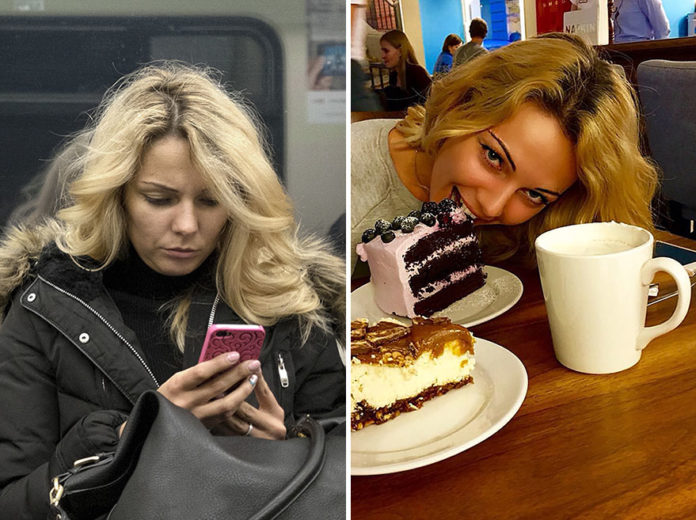 If you still think you have privacy, 21-year-old Russian photographer Egor Tsvetkov will convince you to think otherwise.

In a thought-provoking social experiment for his art project titled Your Face Is Big Data conducted last year, Tsvetkov spent six weeks taking photos of 100 strangers on the Saint Petersburg’s subway before using FindFace (a facial-recognition app) to track down their profiles among the 55 million users on VKontakte (Russia’s biggest social networking site).

According to Russia Beyond the Headlines, Tsvetkov was able to identify about 70% of the passengers he photographed without their knowledge:

“The idea of this project came to me when I first heard of the FindFace app. I instantly knew that I wanted to convey to people how this thing will work. The people did not react in any way, although I was quite obviously photographing them. My project is a clear illustration of the future that awaits us if we continue to disclose as much about ourselves on the Internet as we do now.” The project, Tsvetkov told The Guardian, was aimed to prove the end of privacy as well as highlight the difference between a person’s real life look and the image they project online:

“Nobody noticed that I photographed them, but I used a simple camera and I didn’t try to hide it. One girl in the project texted me after the publication and said that it was a bad feeling when she saw herself, but she fully understood my idea.”

Tsvetkov’s art project not only revealed how much information strangers can gather about us using facial recognition software, it also exposed how we are endangering our real identities by giving up anonymity on the Internet:

“People are accustomed to differentiating patterns of behavior in society and social networks, and allow strangers to see what is, in their opinion, the best, most successful moments of their lives. Such digital narcissism is a product of a culture of free expression that is defining the boundaries of private and public in our time.” According to Stanislav Kozlovsky, an assistant professor at Moscow State University, the difference between the two images is not surprising:

“On a social network, people tend to present themselves as they would like to appear in other people’s eyes, which is often at variance with the way they really look in everyday life, say on the metro on their way to work. From the point of view of psychology, this is quite understandable.”

While the difference between the real and digital identities may not be as shocking, what is truly shocking, however, is the fact that Tsvetkov could effortlessly show how easy it is to identify and track complete strangers through random photos taken in public places.

“I learnt a lot about a person’s life without any contact. I felt slightly uncomfortable. I photographed people who were sitting in front of me in the subway, and then looked for them in social networks using open source software. I was feeling creepy, because when you learn a lot about somebody’s private information like family, or work, or pets you see them in another way.” Tsvetkov’s social experiment is a cruel reminder that there is no such thing as privacy in the modern world. Christopher Weatherhead, a technologist for Privacy International, told The Telegraph:

“This experiment highlights the disconnect between individuals believing they are sharing personal information and pictures only with friends, family, and colleagues, when in reality such information is virtually public. It is critical that we should retain control of the information we put online.”

Identifying someone using facial-recognition technology is no longer a privilege of secret services and police departments — anyone can act like a Web stalker. Racial biases have been cited among the technology’s potential downsides, even apart from privacy implications.

Beth Givens, executive director of the Privacy Rights Clearinghouse, told PC World: “Capturing facial characteristics can be totally unobtrusive to those individuals whose faces are captured. They have no way of knowing it was done.” This article (Photographer Proves End of Privacy Is Here Through Photos That Will Blow Your Mind) is a free and open source. You have permission to republish this article under a Creative Commons license with attribution to the author and AnonHQ.com.