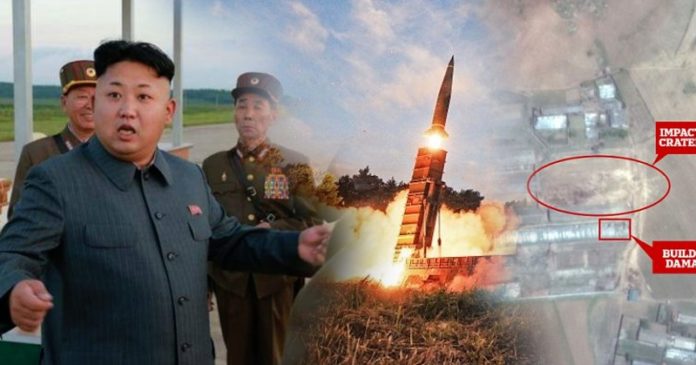 Fears are mounting that North Korea could ‘accidentally’ start a nuclear war after it was reported that Kim Jong-un ‘accidentally’ bombed one of his own cities with a ballistic missile on April 28 last year.

Citing satellite imagery and a U.S. government source, The Diplomat reports that North Korea launched a single Hwasong-12/KN17 intermediate-range ballistic missile from Pukchang Airfield in South Pyongan Province but it crashed in the city of Tokchan.

At the time of the incident, local media reported the failed test, but it was thought that the missile had disintegrated mid-flight. However, evidence now suggests the missile flew at around an altitude of 44 miles before landing in Tokchan, approximately 200 kilometres from North Korea’s capital city, Pyongyang.

The Diplomat explained what likely happened when the missile met the ground:

“Liquid-fuel missiles like the Hwasong-12, which use a highly volatile combination of hypergolic propellant and oxidizer (meaning that the two agents ignite spontaneously on contact), can produce massive explosions depending on how they fail. In this case, with the missile having survived its descent following an engine failure, it is likely that this facility at Tokchon experienced a large explosion upon impact.” Although it is impossible to determine if a loss of life occurred during the failed test, a full account is yet to be released by the Chinese government; however, a Tokchon facility near what appears to be residential and commercial buildings appears to have been immensely damaged.

Google images display the damage the missile caused, where a slight change in trajectory could have seen a populated region affected. Aside from the well-known fact that the North Korea regime is missile capable, the implications for the United States and other allies, as The Diplomat points out, is far-reaching. This early information demonstrates the vanity in the United States’ claims for a potential pre-emptive strike.

At best, according to the imagery and analysis, although the Hwasong-12, Hwasong-14 and its latest cousin the Hwasong-15, require liquid fuels prior to their launch, allied nations would only have, at best, a couple of hours to detect a potential launch. Meanwhile, the Kim Jong-un regime is building a huge and diversified nuclear force that is now spread across multiple sites. Disarming Pyongyang and leaving it without retaliatory options through a first strike option is becoming increasingly unachievable. All in all, halting North Korea’s ballistic missile agenda and its pre-launch basing options is resembling more of a mirage than a western reality.